Articles on Seychelles
by aroundtravels 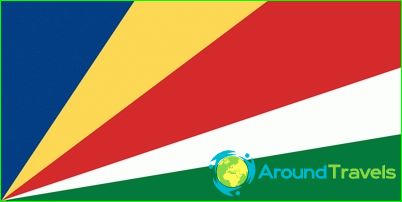 State of the Republic of Seychelles flag adopted in June 1996, and it is an essential symbol of the country, as the national anthem and coat of arms.

Description and proportions of the flag of Seychelles

Seychelles flag has a classic shaperectangle, adopted in most countries of the world. The length of the Seychelles flag exactly twice its width. Use the state flag is allowed to all official institutions and individuals for all purposes on land and commercial and private vessels on the water. For the needs of land forces and navy developed their own versions of the flag of Seychelles.
State Flag The flag is divided intofive pieces of various sizes. From the bottom corner flag near the staff come in the form of a beam of rays four lines, which dissect a rectangle into five fields. The triangular blue field is formed by the edge of the spear, and the upper left part of the Seychelles flag. This piece symbolizes the sky and the Indian Ocean, which is located in the state. Next is the yellow box - a stylized image of the sun, warming the fertile lands of the Seychelles. The red central part of the flag recalls the desire of the archipelago of citizens to work and live in peace and love. Next followed the white triangle symbolizes the law and order as the basis for the country's statehood. The lowest sector of the Seychelles flag is green and represents the nature of the islands and their rich vegetation and diverse fauna.

The history of the flag of Seychelles

many years were in the Seychellescolonial dependence on Britain and its flag was typical of countries with this status are dark blue cloth. In the upper left quarter of the British flag was placed, and the right side of the coat of arms was applied colony.
In 1976, the country gained its independence, and itsflag was rectangular panel divided by two diagonal white lines into four parts. The upper and lower triangles were blue, and the right and left were red.
In 1977, the country's coup wasraised the new flag of the Seychelles. They became the official symbol of the come to power of the United People's Party. It was a rectangle divided by a white wavy line on a horizontal two unequal parts. The top of the flag was red, and the bottom - light green. This option existed until 1996, when the government adopted a modern version of the flag of Seychelles.

Children's camps in Estonia in the summer. Children's ...

Things to do in Krasnoyarsk? What to do and ...