Articles about Gelendzhik
by Kristi 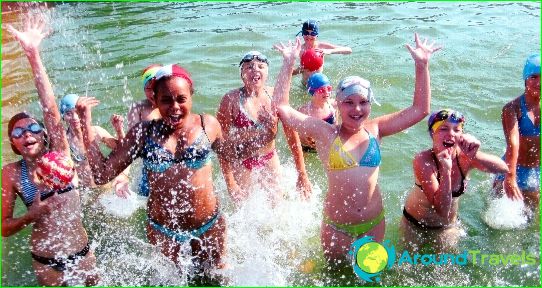 One of the most comfortable and beautifulthe resorts of the Krasnodar Territory is considered Gelendzhik. On its territory there are more than 50 children's camps. In Gelendzhik resort area also includes villages: Divnomorskoe, Kabardinka, Arkhipo-Osipovka, Praskoveevka, Betta and Dzhanhot. Children's camps and resorts are scattered Gelendzhik district. For children's activities selected the best places on the coast. The city-resort on the shores of a beautiful bay, which is surrounded by mountain slopes.

Send the child on the Black Sea coast -a great idea that is easy to implement. Just go to the travel agency to choose the best option. Children's camps in Gelendzhik have good feedback from parents. Guys, come on holiday, visit area attractions. These include a dolphinarium, water parks ( "Golden Bay", "Hippo", "Dolphin"), Safari Park, and other attractions. The city has a 80-meter high Ferris wheel, which was considered the largest in Russia. It is above the capital on wheels 5m Beach vacation -. It is the main advantage of the resort. The beaches are covered with pebbles, but the seabed in the zone swimming covered with sand. Moderately deep bias in depth makes the beaches are very suitable for bathing children. Clean sea water in Gelendzhik region proven by numerous studies. Special services regularly make water samples. Today, the water in the bathing zone of Gelendzhik cleaner accepted standards 20 times.

Trips during the holidays

Children's camps in Gelendzhik upa variety of programs, including tours. In the district a lot of interesting places. The city has a very beautiful promenade. She was recognized as one of the best on the Black Sea coast. According to her, vacationers stroll, breathing fresh air and enjoying the noise of the sea. The surroundings of the resort is also very interesting. Children attend dolmens located on the St. Michael and Janet pass the river, Bigiusskie waterfalls, museums and other places. Especially exciting event is the trip to the Safari Park. There you can see wild animals in their natural habitat. Just above the park stretches the longest cableway. From there, with a bird's-eye view, the entire city is visible. Gelendzhik is located near Novorossiysk, Kabardinka and other cities. The guys have a rest in summer camps, there is the opportunity to visit unique places of the Krasnodar Territory.

Photos of children's camps in Gelendzhik

Dining in Singapore. Prices for food in ...

Children's camps in Odessa in the summer. Children's ...