Articles on Valencia
by aroundtravels 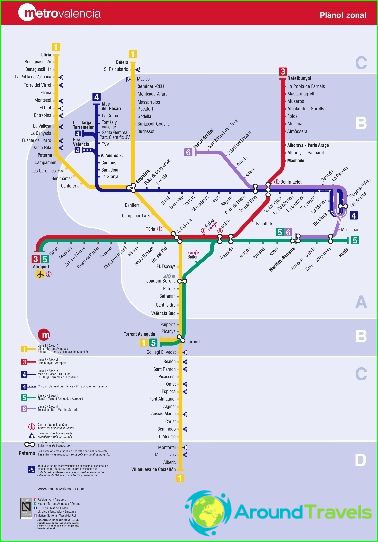 In the Spanish city of Valencia thereCombined rail network and metro lines. It is the second longest after the Madrid metro and transports annually to 70 million. Man. The total length of subway lines in Valencia is nearly 144 km, and the number of stations - 171 - makes the metro system of Valencia fourth in the country.
Underground subway lines are all Valencia24 km of its six routes. 31 station lies under the ground, the rest are on the surface. The government plans to design and build three more subway lines.
Subway became the successor of the old rail networksuburban roads. It was built the century before last and rekonstruktruirovana in the 80s of the past. Today, Metro Valencia - it's three subway line and two tram lines. The latter have the numbers 4 and 6, and are marked on the charts in blue and purple colors.
Subway stations and surface stops in Valencialocated in various zones. Their location depends on the price of the ticket. Total four zones, but the city itself is almost the entire part of the zone A. The airport is located in zone D. The passengers leaving the city by plane or arriving there by air, it is necessary to take advantage of the "red" line connecting the airport with Rafelbunyol and crosses the city from the west to the east, and then - to the north. Suburban Station - a zone C and D. There may be a stop on the passenger demand.

Subway Valencia begins its work 5.00 and carries passengers to midnight. Depending on the desired line and station may be some changes in this schedule, which should be borne in mind, and on holidays and weekends.

Tickets for the Metro Valencia

The fare depends on the distance atwhich will move to the passenger. For payment will buy a plastic card that can be completed in cash if necessary. A ticket for one-way trip must be used no later than half an hour after the acquisition, and the very best deal on travel by subway Valencia - purchase a subscription for 10 trips. This ticket can be transferred to other family members or friends. Children under 10 years accompanied by an adult can ride for free. Each adult passenger is entitled to carry free of two children up to 10 years.

Children's camps in Montenegro for the summer. Children's ...