Home>Articles on Spain>Cuisine Spain: photos, recipes and dishes of national cuisine of Spain 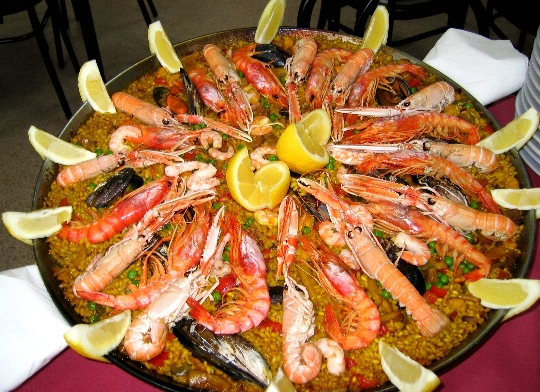 Cuisine of Spain - is fresh, delicious and varied cuisine, with 17 flavors, equal to 17 Spanish regions.

The basis of the national Spanish dishes make upvegetables, olive oil, herbs, garlic, sage, red pepper. For Spanish cuisine is characterized by the following feature: some dishes are fried on the grill, the other - stewed in wine, and others - are baked in sheep cheese. In the north of the country in favor fish dishes - "tuna pot" (mackerel with potatoes), "Pulp-and-feira" (boiled octopus), "changurro" (platter of crabs and shellfish); in the central part of Spain - "Cocido" (rich soup), Iberian ham, Serrano, delantero and other types of ham; in the south - gazpacho and sweet nougat.

Visiting the local catering establishments should beconsider the following: if the prices on the menu opposite will be written "IVA", then your account will be added VAT (7%), and the inscription "IVA include" indicate that to the cost of food is already adding VAT. Travellers, for which in principle the cost of food, you need to take into account another important nuance: consuming a meal at the counter, you pay for your order by 15% less, and if you decide to dine in the open air - on 5-10% more. You want to save money? Look for places that offer set meals (they have a special menu - Menudeldia).

In Madrid, you can look at "Posada de la villa"(Make this inn "Cocido madrileno" -barashka, which is prepared on a spit over an open fire, as well as collector's red or white wine) in Barcelona - in "Salamanca is" (here you are waiting for fish, meat and delicacies of seafood), in Granada - in the restaurant "La Oliva" (here serves Andalusian cuisine and choose a favorite drink from the extensive wine list).

In Barcelona on cooking classes in "BarcelonaCooking "you will learn to cook paella with seafood, cream in Catalan, gazpacho, bread with tomato and garlic, chicken with shrimp and crabs. And for example, in Madrid, you will be asked to take a culinary crash course on the preparation of tortillas or Cocido in Madrid.

Spain can be visited during the celebrationFestival of sweet fruit (Fraga, August), Festival of malloc and pintxos (Valladolid, November), the feast in honor of tapas (Salou, May), Festival of snails (Lleida province, May).

Flag of Cyprus: photo, history, the value of the state flowers ...