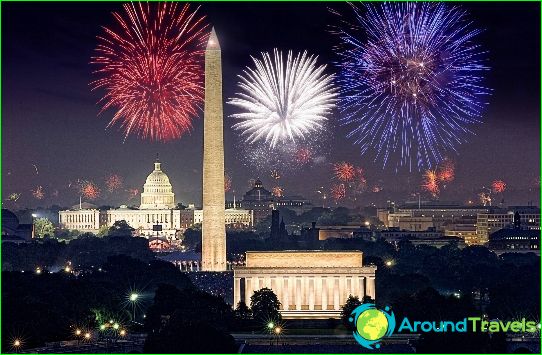 America's capital - the city, which aims tovisit every US resident. It is the cradle of democracy and a place where concentrated the most important monuments of the country. It contains the Declaration of Independence and open significant monuments and memorials. A New Year's Eve in Washington can be an excellent occasion to meet these important landmarks, understand the spirit of America, and the character of its inhabitants, to feel their sincerity and the location to the guests.

The main attractions of the UScapital, examination of which is included in the list of important things in the New Year in Washington, located on the National Mall. This is a public memorial in the city center, which is the main monument - an obelisk of George Washington. The height of a marble stele - 169 meters, and it is the largest in the world among similar monuments. In the west of the mall - the Lincoln Memorial, and a little to the side - Museum of History, which in addition to the Declaration of Independence stored Constitution of the country. The tallest building in the capital - the Capitol. By law, Washington can not build anything that would exceed its height.
In the New Year in Washington is especially nicewalk along its numerous parks, which planted a lot of evergreens. One of them is the residence of the President. The White House can be visited with a guided tour and see with their own eyes the place where work and relax by the president and his family.

New Year's Eve in Washington - a great time forvisit the Center for the Performing Arts. John. F. Kennedy. Here you can visit the ballet or opera performances, listen to the performance of the National Symphony Orchestra. On the eve of the holidays, these creative teams present their best work to the Christmas theme. Do not stay aloof from the general festive mood and Washington museums. They kindly open their doors to fans of painting and sculpture.

Photos of the New Year celebration in Washington

Rest in Montenegro in January: the prices and ...