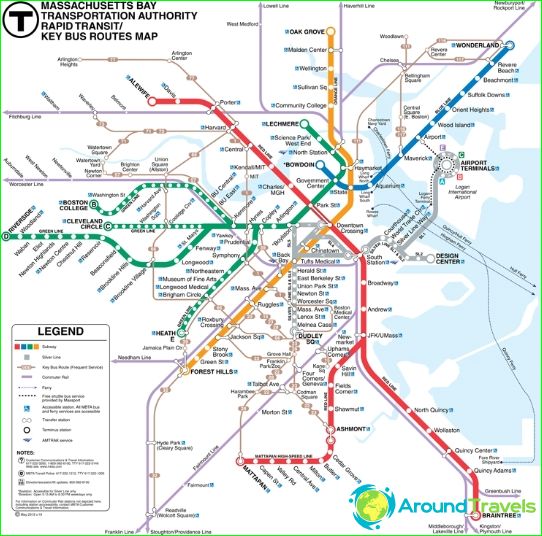 Boston subway network ( 'T') consists of three linesMetro (red, orange and blue lines), as well as light rail line (the green line). Three subway lines - underground in the city center but at the periphery of the city come out to the surface. The total length of all lines - 101.5 km.
Since the opening of the railway in Cambridge 26March 1856, Boston has never lagged behind in this matter by legislators of technical fashion - the city also got its tram line. Thus, Boston - a city of the world's oldest existing tram. By the end of the century the movement of ground public transport was so complicated that the authorities there was a question of organization of the underground road. In 1897, it appeared in the city its metro. The first elevated railway and the first subway line in Boston was built 34 years after their appearance in London, but three years earlier in New York.
The last tram ran on Middlesex by cityin 1930. And in the beginning of 1953 on the remaining tracks in tunnels train passed. The tunnel between the stations of Park St Boylston and is currently part of the "Green Line."
In the early 2000s, the Boston subwayIt serves an average of more than 600 000 passengers per day. Thus, the Boston subway is the fourth subway passenger traffic in the United States.

At the time of transportation carried out in four lines:
Orange line: 19 stations runs from Forest Hills Station to Oak Grove, the total length of 18 km;
Blue line: 12 stations, runs north-east en south-east from Bowdoin Station to Wonderland Station, the length of 9.5 km. The blue color of the line chosen because close to Boston Bay. Branch runs under the bay and along the coast.
Red line: 22 stations, branches from the Alewife station on the two branches to the Braintree and Ashmont to, the length of 33 km.
Green line: 70 stations, branches from Lechmere station into two branches: Symphony is, and from Kenmore, line length of 41 km.

Tickets for the Boston Metro

Tickets for the underground can be bought from vending machines (forcash) and at the box office Metro. There are disposable and reloadable cards (Charlie Card) with different duration. Children under 12 years old are entitled to free travel accompanied by an adult. Each adult can travel with two children. For students, the elderly and people with disabilities introduced a 50 per cent discount on fares.

Malaysia Flag photo, history, the value of the state flowers ...

Thailand Flag photo, history, the value of the state flowers ...