Home>Articles on United States>US Flag photo, history, meaning of colors of the state flag of the USA

US Flag photo, history, meaning of colors of the state flag of the USA 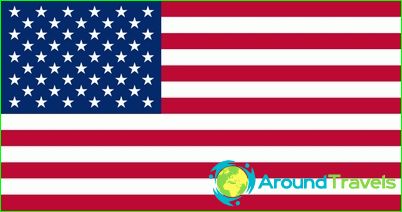 US flag is a flagrectangular shape with non-standard aspect ratio of 10 to 19. On the canvas placed seven red and six white stripes horizontally alternate order. Canton, ie the upper corner near the staff US flag has fifty-five-pointed white stars on a dark blue background.
Little known fact about the US flag is that it closes the three oldest national symbols in the world. In this, he is second only to the UK and France.
The first US flag was raised 14 June 1777. This day, that's more than a century, it is celebrated in America as the National Flag Day. To be precise, the first national flag raised after the Battle of Oriskany August 6, 1777.
Initially, the number of white stars and stripes onflag symbolizes the number of colonies that won the war for independence. Such colonies was 13, such as was the number of the stars and stripes. With the increase in the number of available colonies, which today has 50, Congress decided - not to add stripes on the flag, giving thus a deep respect and a tribute to the first winners. At the same time, the number of stars is still increasing according to the number of educated staff. This rule remains unchanged for many centuries.
Now it's time to explain why the American flagIt is made in such colors as white, red and blue. These colors were chosen not by chance. Here you can see the connection with the Great Seal, which was adopted in 1782. White has become a symbol of innocence and purity, red - valor, and blue - of justice and vigilance.
There are some official restrictions on the use of the American flag. For example, the US flag should not be:
- Lower a little at the expression of deep respect to the person or object;
- Positioning the canton down, as this is a sign of distress;
- Hang the flag in such a way that it will cling to other objects and dirty;
- Carry a flag pole horizontally;
- To wear a flag as a cape;
- Use the flag as a blanket or sheet;
- Use of fabric for clothing;
- Draw on the panel;
- Wrapped in the flag of the objects;
- To put drawings of flags on disposable items.
But what is most interesting, every citizen and resident of the United States is entitled to burn the national flag in protest against something. Moreover, this right is enshrined constitutionally.
Despite the fact that it is unknown whether the 51 staff in the United States will be, but the Institute of Heraldry has developed a flag with a 51st star.