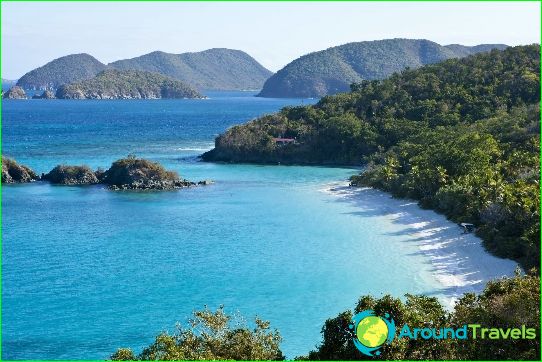 US belong to Alaska, Hawaii, USVirgin Islands, as well as some areas of land in the Pacific Ocean. In the list of domains in this country is part of Puerto Rico, American Samoa, Guam and other areas. Hawaii - The most popular US island. They make up the Pacific group of 24 land areas. These islands are oceanic ridge tops. Among them are active volcanoes.

The largest of the Hawaiian Islands are considered Maui,Hawaii, Oahu, Kahulavi, Kauai and the Big Island. Greatest activity is shown Kilaui volcano, which is located on the Big Island. US Virgin Islands in the Caribbean Sea. This is an organized unincorporated territory of the United States. The largest islands are St. John, St. Thomas and St. Croix. The total area of ​​the territory of more than 346 35 square meters. km.

These US islands are geographicallyVirgin Islands, a part of which also have the British Virgin Islands. The tourists have the popularity of the islands, which lie to the south of Florida. This, for example, the Florida Keys, where the best US beaches. The bottom of the beaches and there are covered with coral sand and grit.

Under the jurisdiction of the State are the Aleutianthe island with volcanic origin. They arc extending from Alaska to Kamchatka. This archipelago is the southern boundary of the Bering Sea, and includes in its membership many islands and rocks. Its total area is about 37, 8 square meters. km.

US possessions in the West Indies is Puerto Rico,occupying the island of the same name. It is the smallest plot of land, is referred to the Greater Antilles. From Haiti to the west it separates the Strait of Mona. East of Puerto Rico are the Virgin Islands. Puerto Rico has a second designation - Island Borik. He was among the possessions of the United States in 1952, together with the islands as Culebra, Mona, Vieques, and others.

Climatic conditions in the US islands are heterogeneous. Most of the country is located in the temperate zone and the continental subtropical climate. Near the Pacific Ocean is a marine climate. The Atlantic Coast is under the authority of the continental sea climate. South Florida - is a zone of tropical weather. In the area of ​​climate Virgin Islands tropical trade wind. There reigns a hot and humid weather. Most earthquakes and hurricanes. Arctic climate prevails in the northern regions of Alaska.

The season in Barcelona. When the holiday season ...