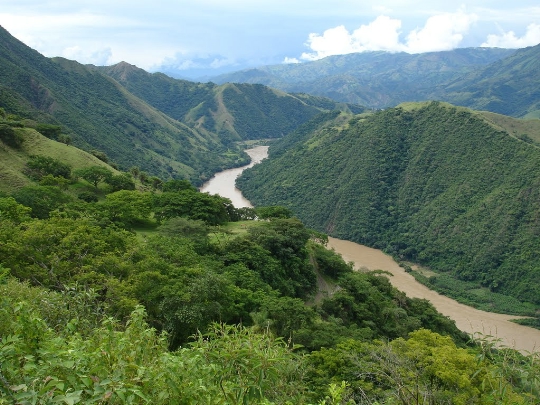 Magdalena - the country's largest river, whose basin is an intricate network of ducts and hoses. No less interesting and other rivers of Colombia, for example, Caño Cristales.

This is the famous Columbia River to the shoresthat rush many guests of the country. Interesting is the fact that the bottom of the bed is covered with colorful mosses and algae. The water Caño Cristales is transparent to the absolute and accomplished does not hide the beauty of your floor. By the way, translated from Spanish Caño Cristales sounds like "crystal stream."

The waters of the river is almost completely freeno impurities. There is here no salts or minerals. That is why in Caño Cristales is absolutely no fish. And because the water is crystal clear, rich shades perfectly visible, despite meter depth. The river bed is a bit like a rainbow - there are red, yellow, blue, green and black shades.

At the bottom of Caño Cristales located wellsnatural origin, where you can swim and relax after quite a long way, if desired. The best time to visit the river - the dry season (June-October), as to admire the unusual colors can only at this time.

Geographically, the river is located in the western partcountry and has its origins in the Andes. The total length of the waterway - 1550 km. The river was opened in 1501 Spaniard Rodrigo de Bastadisom. And according to tradition it was named after the saint - Mary Magdalene.

It Magdalena is the largest rivercountries. In principle, the river is navigable. And the exception - the upper reaches, where he met a great number of rapids and waterfalls. In the Caribbean Sea, Magdalena falls, passing through the city of Barranquilla.

Unfortunately, the river is very dirty. The same applies to its shores. But it was the garbage attracts many iguanas who feel it just fine.

Sights: on the banks of the river is the largest archaeological park of the country - San Agustin. Its total area is 310 square kilometers, and stone sculptures depict gods, humans and animals.

The source of the river is located high in the mountains ZITAR. The total length of the channel - 644 kilometers, and 560 of which are suitable for shipping. And just at the confluence of the Gulf of Uraba River delta forms a huge marshland. Fueled Artato three tributaries - Truando, Sutsio and Murry.

Atrato is distinguished for fast and high-water. In the rainy season the river water level rises significantly, which threatens to flood. Water is muddy Atrato. The peculiarity of the river - gold dust.

Vacations in Portugal with children - Photo ...

How to fly from Budapest to Moscow? Time ...