Airport in Tenerife diagram photo. How to get to Tenerife Airport 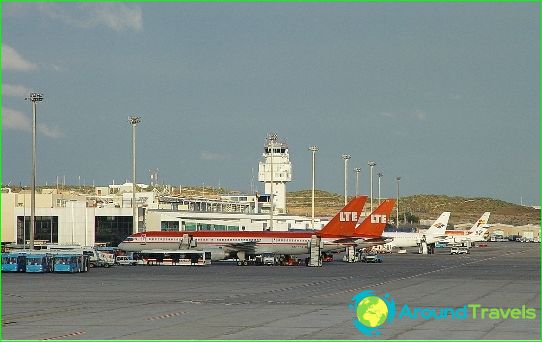 The largest island of the Canary Islands archipelagoTenerife has 2 airports - South and North. The main of them Southern, who is also the younger. North Airport takes less from an unfortunate location, it does not work at night and often closed in the afternoon.

This airport receives the main streampassengers, including tourists from Russia. The airport was opened in 1978, held a grand opening of the Queen Sofia of Spain, it was her name for a long time called the airport. The airport is located 60 km from Santa Cruz de Tenerife.

The airport has one terminal, his passenger is about 8 million passengers a year.

Tenerife South Airport is trying to make the most comfortable stay of its passengers. There are cafes and restaurants, shops, duty-free.

If necessary, you can use the mail service, ATM, currency exchange, medical center.

a games room, a room mother and child are available for passengers with children.

Parking is also available at the airport.

Registration on domestic and international flights starts 1.5 and 2.5 hours, respectively. End of registration 40 minutes before departure.

From South Airport are regular bus services to the capital of the island, as well as some of the beach resorts in North airport. Cost of the ticket is about 2 euro.

In addition, passengers can take advantage oftaxi service, the taxi ordering thus not necessary beforehand. At the exit of the terminal, you can always find a free taxi driver. The fare depends on the destination. Total fare: about 1 euro per km outside the city and inside the city of 0.5 euros. Also worth noting is that the fare price increases by 25% after 22:00.

The second airport in Tenerife - North is mainly used for flights between the islands. Sometimes, the airport receives flights from America.

In general, it may not yield the airport described above. The main problem - it's not a good location, weather conditions often do not allow high-quality work.

Power in Sri Lanka. Prices for food in ...