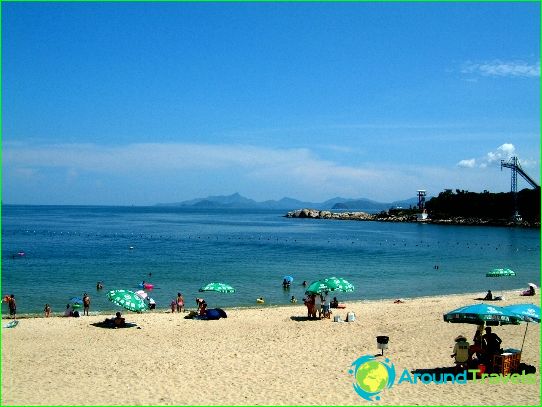 Say at once - find offshore in Guangzhoubeaches, you will not succeed. However, here in the precincts of the capital of the Chinese province Guandan, there are well-appointed river beach. Its equipped on the banks of the Pearl River, about which, however, they say that after heavy rains the water in it is poor - there gets a lot of garbage. But in this case it is provided for swimming pools, where you can splash around without fearing for their health. Getting to the beach is easy and simple - the subway goes here. The area is called Liwan, and Station - Zhong Shan Ba, it is necessary to go through the exit D. You can get there by bus and - nine routes goes here. Beach fee, to be exact - will have to pay an entrance fee, and even on-site umbrellas and deck chairs can be taken freely occupy lockers for things and use the showers and locker rooms.

But for those who can not imagine without the sea beach holidayits salt water and big waves, it is necessary to make the journey a little longer - the beaches Dameysha Syaomeysha or that are known to all the inhabitants Guandanya. Residents of the province in the summer holiday loved to ride on the beach in Shenzhen. Get away from Guangzhou to the beaches of two ways:

Voyage can take more than 3 hours, but you will be met by the best sandy beaches of Guangzhou, more precisely, not the city itself and its surroundings.

Dameysha Beach is located on the BayDapenvan. The sand on this beach is shallow, light golden color. By the sea the color changes from blue to dark blue, depending on the time of year. Beach is ideally surrounded by a chain of picturesque green hills. Its beach is longer than in 1800, which made it possible to divide it into several specific areas: swimming area, area for entertainment, sports area and a barbecue area. On the beach you can see the sculpture groups expressing thirst for a better life, as manifested in the young so-called "drifting generation" (1940-1980-ies, when it was unable to find stable work, not even dream about the good living conditions).

In addition to simple navigation, you can take a flight with a parachute behind a boat, water skiing or motor boating. The best time for swimming - from May to October inclusive.

A more tranquil beach - it Syaomeysha. This place is separated by only a kilometer from the Dameysha in a northerly direction. It's not as crowded and cramped, although the length of the beach is only 1 km away. The beach is close to Shenzhen, which attracts water sports enthusiasts. In addition, you can rent a motor boat or a fishing rod. Foreigners come here to go surfing, because after the typhoon is very possible to catch good waves. In the evenings sometimes take place on the beach "Night Syaomeysha". This free show, including ethnic dances, performances by jugglers and acrobatic shows. Near the beach there is a dolphinarium.