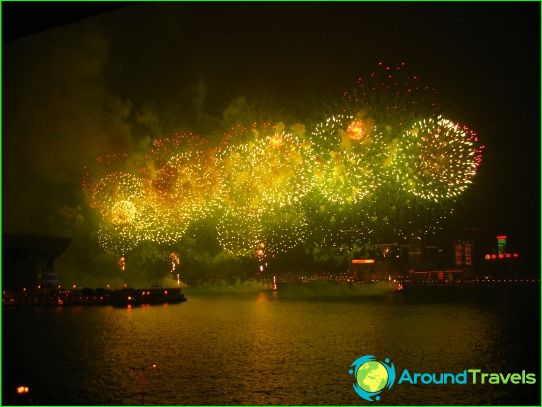 Guangdong Province, the center of which is theGuangzhou, is no accident called the "world's workshop". It is here that made a good half of all Chinese exports. The city is the largest foreign trade port and one of the most interesting in the country for foreign investors. However, ordinary tourists are here, too, have something to do, but because the New Year in Guangzhou - a great way to meet winter holidays.

A point on the map

When -That Guangzhou was founded as a startingpoint of the Silk Road. Since then, almost 3,000 years have passed and the small settlement became a stronghold of the production, the international exhibition and fair center. Here you can buy anything you want, but true fans of the East come to Guangzhou for some other reason. This place is on the map known to gourmets and their sympathizers as the center of the restaurants with the best of Chinese cuisine.
The saying "Do you want to eat - go toGuangzhou "was born in ancient times. Culinary Heritage Guangdong province so rich and widely known that the local cuisine is considered the best in the world. Noting the New Year in Guangzhou, you can be sure that you have to taste the unimaginable quality seafood, the famous local dumplings dim sum, swallows' nests with exquisite sauces and shark fin soup. The apotheosis of the holiday table are the gold suckling pigs and delicious desserts.

Christmas in Hungary, traditions, photo. As the ...