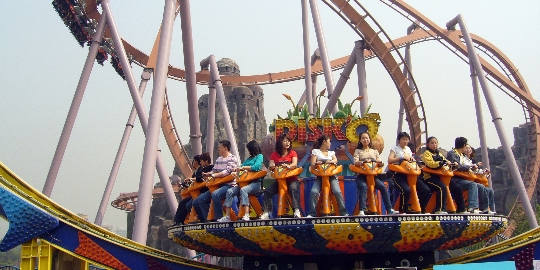 Beijing - this is without a doubt one of the mostinteresting for the tourist parts of China. By the standards of this country it is not the most crowded (just over 21 million inhabitants), but every tourist simply can not come in awe looking at this gigantic metropolis. Remarkable in that every traveler can find here entertainment for all tastes. Attractions in Beijing are considered to be among the best in the world, so that amateur family-friendly also makes sense to look here.

This park is perhaps the hallmarktown and even called the Beijing Disneyland. Throughout the working day audience entertained by costumed presentation, in which the main characters are a Chinese cartoon characters. And although foreign tourists are often unfamiliar pleasure from the spectacle that does not diminish.

BeiJing Happy Valley is a pretty interestingstructure. Center all here - Atlantis, around which these play areas are located: Antique; Maya kingdom; Tibetan Shangri-La; Ant fictional kingdom. Open every day from 10 to 17 hours.

In many ways, similar to the previous, only heremore water attractions. The main "trick» Amusement Park lies in the fact that it is situated in a very picturesque valley, surrounded by mountains, so there is not only possible how to have fun, but also make a lot of good photos.

Also, Beijing Amusement Park is themodern city, so this is where the steepest attractions located in Beijing. Its only disadvantage is crowded and long queues for the most popular rides. Open every day from 09:00 to 17:00, entrance ticket price is about ¥ 10.

A kind of continuation of the Beijing Disneyland. It has a lot of modern attractions, made in the tradition of oriental tales. However, among the canonicity of Chinese characters there are also quite familiar Europeans and Americans Pinocchio, Donald Duck, Mickey Mouse and others. So, Shijingshan Park is also a must-add to your list of every tourist.

What to take to Greece. What kind of things and ...

Airport Salekhard: diagram photo. How to get ...