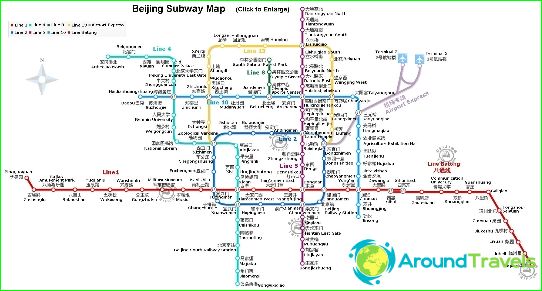 Beijing Metro map
Beijing Subway is a systemhigh-speed rail transport, which serves the capital of China and the suburban areas of the municipality. Beijing Subway is the oldest subway in mainland China - the first line was opened on October 1, 1969 to the day of the celebration of the 20th anniversary of the founding of the People's Republic of China.

Now Metro is a 17 line, 232stations and 465 km of track. This makes Beijing Metro the third largest metro in the world, after Seoul and Shanghai. According to the Beijing subway passenger traffic ranked second in the world after Seoul - in 2013 the number of trips made 3.209 billion Thus, the average daily passenger traffic -. More than 10 million people a day. The absolute record was established on 12 July 2013, when 11,046,900 passengers used the metro. However, the existing transport network does not meet the growing demand of the population, Beijing plans to expand to 19 metropolitan subway lines and more than 708 km of track by 2015 and 1,050 km of track by 2020.

Subway in Beijing is closed after midnight, exceptholidays. The first trains depart at around 5 am, the last - about 11 o'clock in the evening. Airport Express Train traffic starts at about 6 am.

The time to arrival of the train at the Beijing subwaydisplay is in minutes. The subways station names are announced in Chinese and English. For the convenience of passengers, information boards and monitors the scheme subway. The new cars are equipped with LCD-circuits, which indicated the route that follows the train.


Tickets for the Beijing subway

Due to the annual subsidies fareBeijing subway is the lowest among all of China's high-speed systems. pass Payment allows you to make an unlimited number of trips on all branches of the metro, except Aeroexpress. Children shorter than 1.2 meters has the right to travel free accompanied by an adult passenger.

To pay for the travel necessary to the ticket machineor the box office to buy a single ticket, valid for the day, or travel (updated daily toll card) - in both cases it is a card with a magnetic strip. At each station set from 2 to 15, ticket machines. The card is applied to the window validator turnstile and keep until the end of the trip - at the exit card will need again.

Mobile communication is now present on all lines except the tunnels between stations on lines 1 and 2. In the near future this problem will be solved.

Each station is equipped with the Beijing subwayramps or elevators for easy access for passengers in wheelchairs. New models of cars now provide space for wheelchairs. [124] The automated audio announcements for incoming trains are available in all lines except for the line 1. On all lines, station names are announced in Chinese and English.

Christmas in Australia, traditions, photo. As the ...

A trip to Belgium