Home>Articles about China>Articles on Beijing>Beijing Zoo - photos, price, hours of work. How to get to the zoo in Beijing

Beijing Zoo - photos, price, hours of work. How to get to the zoo in Beijing 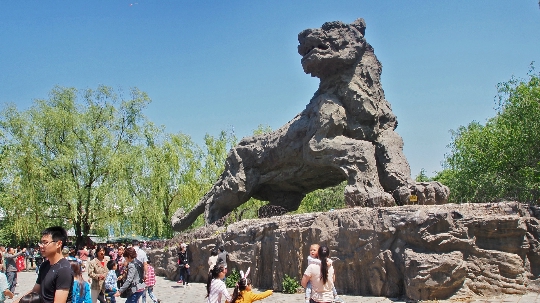 Shortly after the founding of the PeopleOf 50-ies of the last century on the site of the old "Garden of Ten Thousand Animals" was born in Beijing Zoo, which has become today one of the most important and beloved by all travelers attractions of China's capital. Historians say that the plants and animals bred in this place during the time of the Qing Dynasty, which ruled China from the fifteenth century.

Western edge of the Park

It got its name, located in the westernthe city of Beijing Zoo is worthy on its vast territory rich in fauna and flora of the central and south-eastern Asia. Decorated in the tradition of classical Chinese landscape design, the zoo offers a stroll through the manicured groves and lush gardens, admire the unspoilt lake with a blossoming lotus and meditate for measuring the noise of small waterfalls in mountain streams.

More than 7,000 animals representing 600 species,today inhabit spacious aviaries Beijing Zoo. The real pride of its organizers - the giant panda is a national symbol of China and logo emblazoned on the WWF World Wildlife Fund. Favorite of the public were also Australian kangaroo, zebra and African Manchurian tigers, and opened in 1999, Beijing Aquarium - the largest in the country. Water-arena regularly hosts a show with sea lions and dolphins.

The zoo is located in Xicheng District in the western part of the city opposite the Astronomical Observatory.
In order not to get lost in the hieroglyphs, should focus on the address of the zoo on the map - it is located at the corner of Xizhimen Outer Street and Dongwuyuan Road.
To get to the zoo in Beijing on the trains can be the subway line 4, going to Beijing Zoo station.

The price of tickets in the summer - 15 yuan, in the winter - 10 yuan. Entrance to the panda house is 5 yuan.
For a ticket for entrance to the aquarium only have to pay 110 yuan for adults and 60 - on the child.
Most advantageous to acquire a comprehensive ticket to visit the zoo, the aquarium and the House of pandas. It costs 120 yuan for an adult, and 60 - for the child.

Unforgettable photos can be done not only in the Panda House, but also in Beijing Oceanarium. There are dolphin shows:

To participate in the show with fish-Bryzgunov have the opportunity every day except Thursday. The first presentation starts at 09.30 and the day - at 14.30.
Official Site - www.bjzoo.com.
Those who know the Chinese can call +86 10 6839 0274.