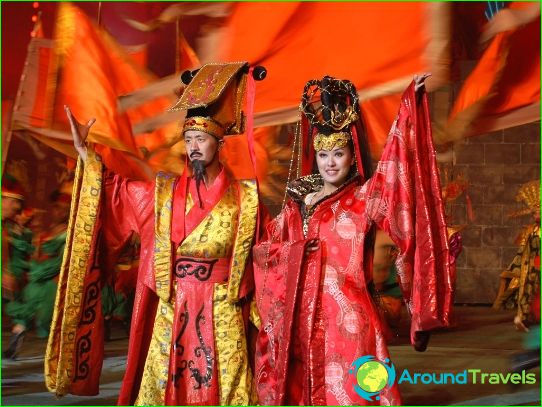 On the territory of modern China was born oneof the most ancient human civilizations. Chinese culture has developed over almost five thousand years, which led to the world-significant philosophical and religious currents.

Ethical and philosophical principles of the doctrine calledConfucianism, appeared in the V century BC. They were brought to China Eastern culture wiser than Confucius. His teaching has become for many people in the country is not just a political ideology, but ideology, social ethics as a whole. Confucianism has no equivalent in Western culture. The emerging around the VI century BC, it comes at a time of political and social change and has played such an important role that is only in the twentieth century it was replaced by the "Three People's Principles" of China.
Basic concepts of other philosophical directionsin Chinese culture, Taoism - opposite each other yin and yang, symbolizing the male and female. Despite the differences, the yin and yang do not exist in isolation and flow into each other, forming a complete picture of the world.

Tens of thousands of letters

That is the number of characters inventedthe ancient Chinese to refer to concepts and words. The characters first appeared more than four thousand years ago, and the main feature of ancient Chinese writing is its direction - from right to left and top to bottom. Modern Chinese writing from left to right, but the outlines of characters changed little over the millennia, and therefore can be attributed to the Chinese culture and calligraphy.
The ancient Chinese took notes on tortoise shellsflat bones and animals. With the invention of bronze casting characters began to decorate vessels, vases and other household items. Chinese "letters" are inscribed on the other works of Chinese art - silk carpets, paintings and embroideries.

Chinese architecture embodies the bestEastern traditions, and some of the monuments erected hundreds of years ago, still adorn the city and country villages. In ancient times in China, it was decided to build out of wood.
The most famous monument of architecture - Forbiddencity ​​located and Beijing. The residence of the emperors, the palace is the largest object of its kind in the world. An example of a stone construction is considered the Great Wall, which stretches across the country for a few thousand kilometers. Its majestic outlines are visible even from outer space and guided tours to one of the greatest monuments of Chinese culture is very popular with tourists.

Rest in Belarus in September: price ...