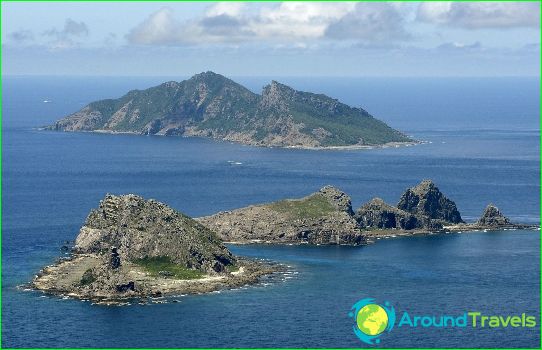 China is the third largest amongcountries of the world. This is a huge state, which owns a large number of islands. Many of them do not have the population of the small size and lack of drinking water. Islands of China, is world-famous - it Chongming, Hainan and Taiwan.

Taiwan, formerly known as Formosa. This island is a major tourist and economic center. From the mainland it is separated 150km Taiwan Strait. Island in the east bordering the open Pacific Ocean. Its northern coast is washed by the East China Sea, and from the south island has access to Philippine and South China Seas.

Together with the surrounding territories is consideredpartially recognized state Republic of China. In Taiwan tourists go who appreciate good service, entertainment and beautiful scenery. On its territory there remained a lot of ancient buildings, so a beach vacation can be successfully combined with cognitive excursions.

In southern China is Hainan Island. It is located in the tropics, so the sun shines almost the whole year there. The volcanic origin of the island has determined the existence of dormant volcanoes and thermal springs. Hainan is situated on the same latitude as Hawaii. Therefore, the island is sometimes referred to as the Oriental Hawaii. It is surrounded by waters of the South China Sea, which is famous for the variety of creatures. The island is characterized picturesque nature, tropical flora and fauna, numerous monuments of culture, beautiful beaches and unique culture of the local population.

The biggest sand island of the world is considered to beChongming. It is home to the mouth of the Yangtze River. This alluvial land area is the third largest island in the country. It is characterized by a smooth terrain, fertile soil and beautiful forests. Age of the island more than 1,300 years. It is surrounded by small islands. Getting from Chongming to Shanghai is a 1-hour river tunnel.

Small islands have developed in Chinaeconomic system, despite its diminutive size. Macau is a small island, removed from Hong Kong 65 km. The population on the island is more than 420 thousand people.

China lays claim to the Spratly Islands and theParacel. It disputed land areas, which tend to take over as the Koreans, Vietnamese, and representatives of other countries that have access to the South China Sea. The 2005 list of China's islands replenished as a result of the demarcation of the Russian-Chinese border. The Republic of China has received part of the Big Island and 2 sites on the islands of the Big Ussuri and Tarabarov.

The capital of Laos: map, photo. What is the capital city in ...