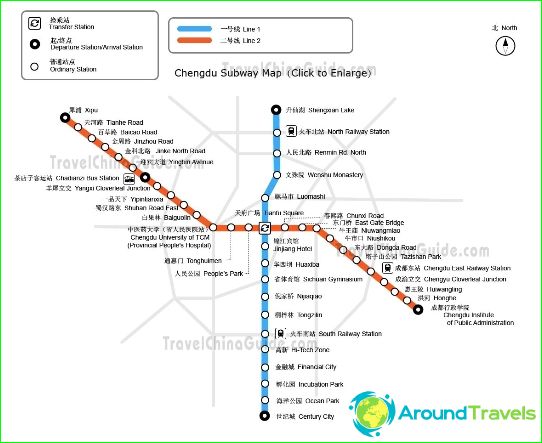 Eleventh in China began subwayChengdu city. Its first stage was launched in September 2010. While in the city the only two lines, length of route which is 41 km. At the two open branches 37 stations for the entry and exit of passengers for a transplant which can make the first to the second line and back. Chengdu Metro Construction began in 2005, and within five years, residents and visitors were able to quickly and easily travel from the center to the outskirts.
The first line has a blue label in the diagram. The length of the "blue" branches is about 19 kilometers and 16 stations allow passengers to get to their place of work or study without traffic jams. It connects the southern business district of the North and South stations.
The second route Chengdu Metro has "orange"marked on the map, and runs from the north-western areas of the city to the southeast. The first phase of the "orange" line was put into operation in 2012, and today, its length is about 23 kilometers. Passengers can take advantage of this route 21 station for trips to Chengdu Metro. This line connects the city of East Railway Station, with its bus station Chadianzi.
In the future, the city authorities are going toto build three more lines, resulting in Chengdu Metro will have an extension of its line of more than 120 kilometers, and passengers can use trains on 116 stations.

The fare on the subway made by Chengdupurchases from vending machines at the station ticket, which includes a menu and an English version. The fare depends on the distance from the center of the required station, as all the metro lines are divided into tariff zones.

Airport Porto: diagram photo. How to get ...