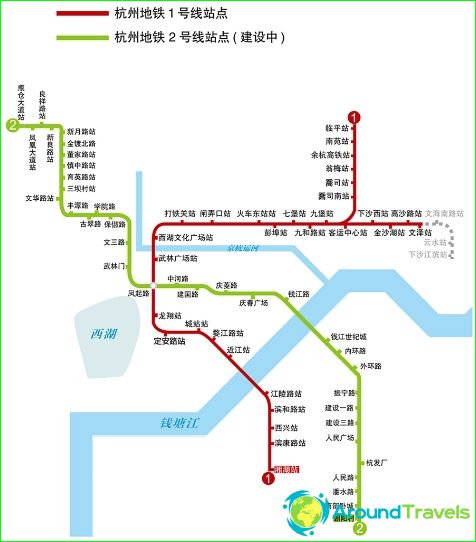 Metro in the Chinese city of Hangzhou began to buildin 2007, and its first section was put into operation in November 2012. While in Hangzhou Metro operates only one line, which begins in the south of the city, rises and the west where makes a turn to the east. On the eastern outskirts of the branch turns south. In the central part of Hangzhou metro line has a branch in the northern direction.
The total length of the existing metro lineHangzhou is 48 kilometers. On the route of its trains to enter, exit and transfer of passengers to terrestrial modes of transport is open 31 stations. Most of the first branch of the Hangzhou Metro - 36 km - runs underground. The rest of the way-laid above ground flyover and ground ways.
The second metro line under construction will connect Hangzhouthe north-western regions, the central and southern districts of the city. Its length is 12 kilometers, and in the day of Hangzhou Subway will carry no less than 300 thousand passengers. In the future, the total length of all routes Hangzhou Metro exceed 270 kilometers.
All Hangzhou subway stations have a typical appearance. They are gated stations in which no lateral platforms. Openings on both sides of the hall doors closed, separating the passengers from the tunnel. Upon arrival at the train stop in such a way that their doors are in front of the door to the waiting room. The doors between the hall and the ways in Hangzhou Metro are made of glass, and go down to the platform or climb to the city can be like an escalator and elevators that allow disabled persons and persons with disabilities to comfortably use this kind of transport.

Tickets for the Hangzhou Metro

The fare on the subway in the city is performedHangzhou with specialized machines Ticket. Travel documents must be activated in the card reader at the entrance turnstiles on the platform and store up to end of the trip. The machine has a menu option "Select the English version," so that the fare on the subway in Hangzhou guests of the country there are no problems.

Top 7 hazards that may be encountered skiers ...

Airport Bremen scheme, Photo. How to get ...