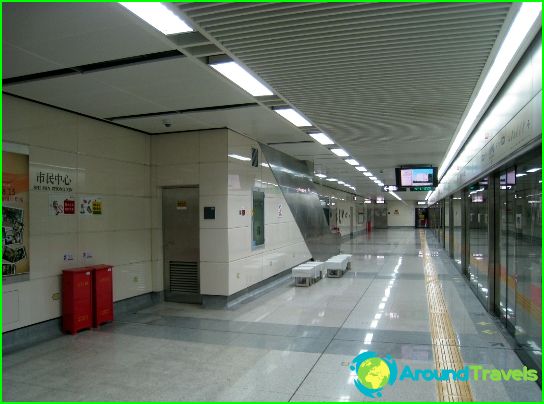 In 1984, a goal in the Chinese Tianjin opened a newkind of urban transport - underground. He became the second in the country after Beijing and significantly relieve the city streets and highways. Today, Tianjin subway - four operating lines on which passengers can take advantage of 86 stations for input and output, and other direct routes and ground transportation. Tianjin metro line stretching nearly 135 kilometers.

Construction of the subway began in 1970. The first line of the Tianjin metro was put into operation in 1984. It consisted of eight stations. After the reconstruction of the first branch, on the marked circuits red, its length has increased significantly, and the number of stations has increased to twenty-two. "Red" branch starts in the north-west of the city and continues south to the center, where the route of its trains is set in the east. It intersects with the "yellow" and "blue" lines on which passengers can go if necessary. "Yellow" route number 2 connects the east and west of Tianjin, and the "Blue" is the number 3 and runs from north-east to the south, and then - in the south-west. In 2001, construction was begun Tianjin metro line number 9, which is a so-called "easy" option. It already passed the first two years after the bookmark, and in 2006 at 9 branch "blue" color already worked 19 stations. Line 9 is the first and only one in Tianjin Metro is controlled automatically. It stretches from the town center towards the coast, linking the old part of Tianjin with its new economic zone.