Home>Articles about China>Reserves of China: national, nature reserves in China 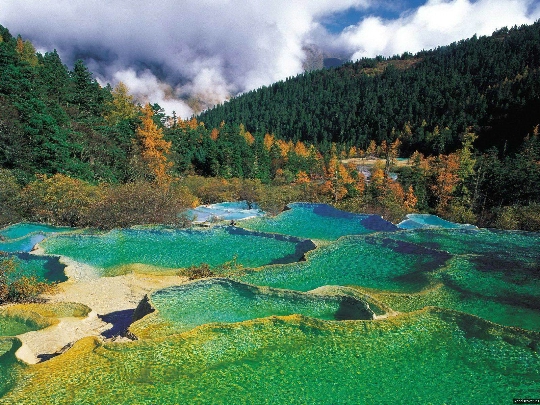 Besides the huge cultural heritage and the pastinnovations in the field of construction neboskrebnogo Celestial willingly shows visitors its natural reserves. Among the many Chinese and protected areas of nature reserves are some very popular tourist destination, thanks to the possibility to admire the unique natural landscapes and watch the endangered and rare representatives of fauna.

The main conservation organization planetHe has chosen as its symbol the giant panda, whose image adorns the emblem of the fund. The most important, from the standpoint of these lovely animals, China's Reserve - Nature Reserve Sichuan Volun.
Created in 1963, this national parkdesigned to protect the giant panda, the population of which in the second half of the last century is rapidly declining. Today Volun Reserve is home to about a hundred of these lovely bears, which are the main food is bamboo.
Bamboo groves - no less proud of scientists,engaged in the environmental reserve. Seeing as almost a meter of bamboo shoots grow per day, may tourists visiting Volun for two days in a row - that is how much time propose to hold in reserve local excursions.

This Chinese nature reserve in the east of the country especiallyWe love those who are crazy about the mountains. It's no joke, because in the area of ​​just 82 square meters. km. focused dozens of natural attractions and unique landscapes:

On the highest peak of China reserveIt can be reached on foot along the cliff path or use the funicular. From the height of Tianzhu Peak, rising to the sky almost half a kilometer, great views of the Yangtze River in its lower reaches.

The kingdom of the tropics

The reserve Oolong all great - butterflies hereresemble strange birds, cicadas and reach a length of 15 cm, recalling animals than insects. Different ecosystems of this national park allow to dwell on its territory the red panda and the red deer, snow leopard and the mongoose. The biggest mystery Oolong - The Invisible Mountain, whose summit is closed 350 days of the year the clouds. Who saw her at the local signs are very lucky in life.