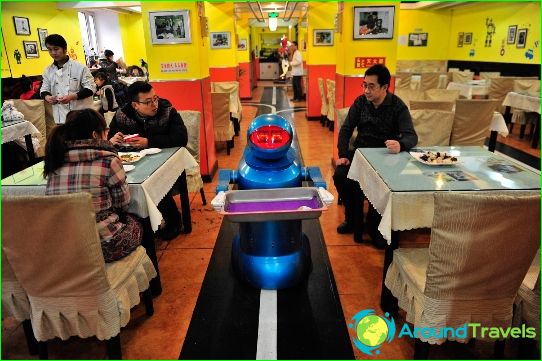 With Chinese food more each yearconquering the world, and the presence of the restaurant with the characters on the facade is now difficult to surprise even the residents of a country town in the Russian hinterland. Once in China, travelers are pleased to find that authentic restaurants in China is much more diverse, and can also be a simple street diner with plastic furniture, and it is a decent restaurant with a well-trained staff and solid prices. Fortunately, the quality of the food, these subtleties little effect, because China is prepared in a tasty and varied wherever there is a center and visitors.

Leafing through the menu

Proposed names of the dishes on the menu of localrestaurants in their right mind can neither pronounce nor remember no European. Typically, communication with waiters going on at the "pointed at the picture - was not quite the strange taste." To such situations as little clouded the mood of the traveler, the authorities were obliged to restaurant owners in China to translate menus in foreign languages, including - Russian. While the case is with difficulty, but increasingly under photos of dishes and you can read Russian letters.
But problems with the devices in restaurants and cafesfor foreigners does not exist. The feed wand default quickly duplicated knife and fork at the first request of the visitor. How to ask, not knowing the Chinese? Sign language China waiters understand English much better.

Served in the restaurant in China this duckPeking - the cherished dream of any gourmet. Choose an institution does not need to slowly, thoroughly, because not all ducks are equally tasty. Street option in this case is not very suitable, because the absorption of this dish requires the observance of certain ritual. Meat cuts waiter special sharp knife and serve with vegetables, sauces and pancakes made from rice flour. Portia is a famous delicacy in a restaurant with moderate prices around $ 20.