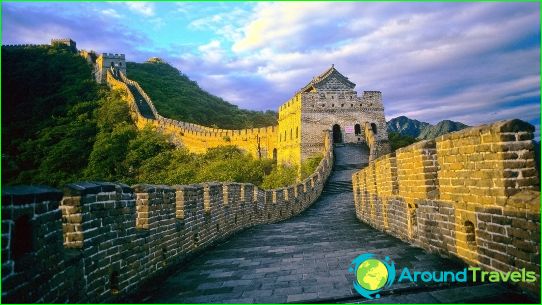 The vast country occupying most of theAsia and actively promotes all areas, including industry, agriculture, transport and culture. With this development tourism in China can not just stand by.

The more that the country is becoming moreopen to the world, and the number of foreign tourists has already reached the third place on the planet, not to mention the records of internal travel. Guests from different countries and continents go in search of the exotic east, artifacts of ancient Chinese culture and art, philosophy and architecture, national traditions.

Given that China is hugeterritory, characterized by the peculiarities of climate and diversity of natural landscapes, and also has access to the sea, there are all conditions for recreation, and for lazy pastime on the coast.

In the green expanses of China

Tours, whose main objective familiarity withunique natural objects, becomes widespread in this country. Many travelers come specifically to China, to meet with a variety of geographical landscapes and natural attractions that are revered in local religions.

Some tourists dream of a pilgrimage on the sacred mountains of China, who are revered and Taoism, and Buddhism. There are five such iconic points in the territory of the country:

Also beautiful in China rivers and lakes, which are toBesides, they have poetic names. For example, a crystal clear lake Tianchi translates Heavenly Pool, and the Yangtze River, you can see the scenic area, which received the name of "Three Gorges" and is one of the main natural attractions.

By the Great Wall of China

There is probably no man on the planet earth, whichI would not have known about the main monuments of this unique country and wanted to visit here. not the entire wall open to tourist visits, but only some parts. But enough of them and a guest to ever fall in love with China and its hard-working people, who were able to leave a memory of himself as a grand defensive structure.

Uganda Flag photo, history, the value of the state flowers ...