Home>Articles about Congo>Congo Flag photo, history, the value of the state flowers of the Congo flag

Congo Flag photo, history, the value of the state flowers of the Congo flag 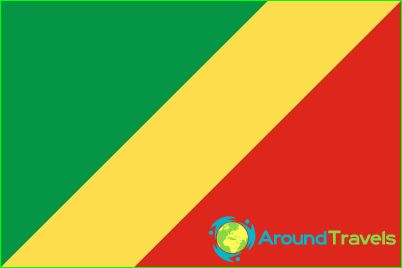 Republic of the Congo National Flag was approved August 18, 1958, when the country received a new status of an autonomous republic, part of the French Community.

Description and proportions of the Congo flag

Congo Flag is a traditionalrectangular panel, which refers to the length of the width in the ratio 3: 2. In the Congo flag with traditional colors for African countries: bright green, yellow and bright red. They are symbolic for the people of the black continent. For the Congolese Red is a tribute to all the heroes who died in the struggle for sovereignty and independence of the Republic of the Congo. Yellow field on a flag - a symbol of the natural wealth of the African land, which is hidden in the depths of a lot of minerals. The green part of the Congo flag tells about the natural resources of this country.
Unlike the vast majority of the worldnations whose flags have a horizontal or vertical arrangement of stripes of the flag, from the Congo to the cloth strips are inscribed diagonally. Above and to the left triangular field has a bright green color. Lower right corner - red. Flag Center occupies a yellow stripe.

The history of the Congo flag

Congo National Flag was first formallyIt approved in 1958, when a French colonial rule was over. The country is in the status of an autonomous republic adopted its own flag, emblem and anthem.
Soon, in the country there was a political upheaval,Parliament abolished, and management took over the Central Committee of the Congolese Party of Labor. At the end of 1969 in connection with these events has been changed and the state of the Congo flag. They became rectangular cloth bright red color in the upper left quadrant which was applied coat. It was a crossed hammer and hoe, placed between the palms. Crowned with five-pointed star emblem, and located below the tape with the motto of the Republic, inscribed in French: "Work. Democracy. Peace". Leaves of palm tree depicted on the emblem of green, hoe, sickle and star - gold, and had a white ribbon.
The democratization of the country and the emergence of multipartysystem in the Congo in the early 90-ies of the last century led to the fact that the ruling party was in opposition, and the national flag was the flag again in 1958 sample year. His re-established as the official symbol of December 30, 1991, and since then the Congo flag remains unchanged.

Photos of the Congo flag

The streets of Tashkent - photo, name. List of well-known ...