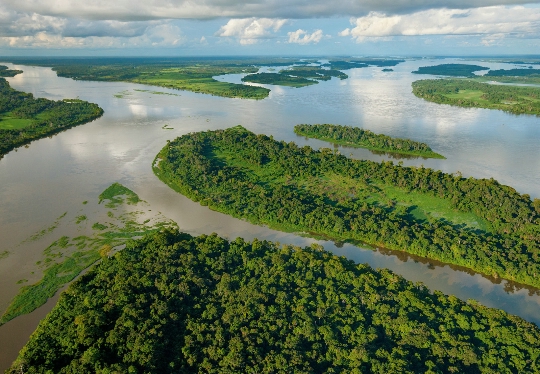 Congo River for the most part not too long and the local "queen" of course, is the river Congo. Other rivers of the republic are much shorter and are often its tributaries.

Congo - the main river of the whole of Central Africa. The mouth of the waterway was opened in 1482. The man who came for the first time in the waters of the Congo, became a Portuguese Dien Kar. The main direction of its activity was trade, and the river was just a tool in establishing commercial relations with the Kingdom of Congo. By the way, the basis of the whole economy at that time was a slave. The upper course of the river has been studied only in 1871.

Congo - the only river in the world, twicecrossing the equator line. And that is why the level of local waters is held throughout the year at the same level. Congo Basin - the locus of the equatorial forest. Due to the high humidity of the representatives of the local flora such as ebony and mahogany, and oak trees, in height can reach 60 meters.

Aruwimi River - one of the major tributaries of the Congo, a total length of 1,300 kilometers. The origins of the river takes in the Blue Mountains, west of Lake Albert.

The river is suitable for travel only in their lower reaches, since upstream has many waterfalls and rapids. Investigator Aruwimi River riverbed became Mr. Stanley.

Ubangi - the largest tributary of the Congo. River navigable throughout the year, starting from the city of Bangui, and up to the confluence of the Congo. pervoissledovatelya its basin Rights belong to the German botanist Georg August Schweinfurth.

The waters of the Oubangui can find fish-elephant. The length of the fish is relatively small (35 cm), but the name it has received because of the long lower lip, something resembling an elephant's trunk. For the orientation of the electric organs used in the muddy river water fish located at the end of the tail.

Basin - a place known to all minersdiamonds. And, because the Congo government is unable to control illegal mining, the huge number of stones exported from here illegally.

Germany Cuisine: photos, dishes and recipes of the national ...