Articles about Simferopol
by aroundtravels

Where to go with children in Simferopol? 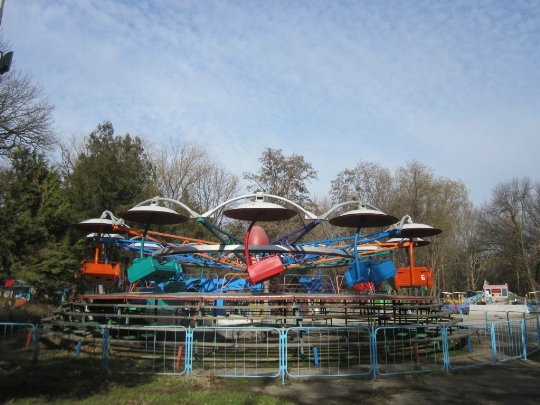 Center of the Crimea, its cultural, administrative and transportation center - the city of Simferopol. Tourists coming to rest in the Crimea, passing through its center.

In Simferopol, there are numerous museums,cultural institutions, beautiful parks. From museums with a child can visit the Ethnographic, Republican Crimean Tatar Art Museum, the Central Museum of Tauris. The city has numerous monuments. Suvorov AV, AS Pushkin, a monument in the form of a tank, etc. From the architectural noteworthy temples, cathedrals and churches. Next to the Soviet area has a beautiful alley, where you can see a sculpture made of iron.

Comfortable city parks provide a pleasant stay inthe shade of trees. On the bank of the river stretches Salgir park, where you can have a good time and enjoy nature. The most popular is the city park named after Gagarin. It is located in the heart of Simferopol. On its territory are working various children's rides and a miniature zoo. There you can just take a walk, listening to birds singing, or take a ride on the carousel. Of the most interesting attractions are the "Ferris Wheel", "Kamikaze" and others. The larger is a botanical garden with rare plants and European furnishings. Children's park is open for Kuibyshev Square. There are rides, an aquarium and a small zoo.

If you want to attach the baby to the worldart, buy a ticket to the theater. In Simferopol works Puppet Theatre, Drama Theatre, Philharmonic and others. The Crimean music theater offers musicals, comedy, operetta and opera. Before the theater is Lenin Square, where are the youth music groups. Square and the theater are the most famous urban area for touring.

Where to go with children in Simferopol that theyYou can do mobile games? In this case, it is recommended to visit one of the entertainment centers of the city. The largest and most popular is considered the center of "Mona Everything." It offers fun such as trampolines, three-story maze, sports relay, slot machines, slides, disco for children, room for creativity. Zones in every shopping and entertainment center of Simferopol. Making purchases, parents can leave their children in such a zone under the supervision of an instructor. Good rides are available in the specialized children's complexes "Dzhungariki", "Watermelon," "Mowgli".

Taxis in Portugal - prices, order. How many ...