Home>Articles about the Crimea>Crimean beaches are: photos, videos. The best sandy beaches of the Crimea

Crimean beaches are: photos, videos. The best sandy beaches of the Crimea 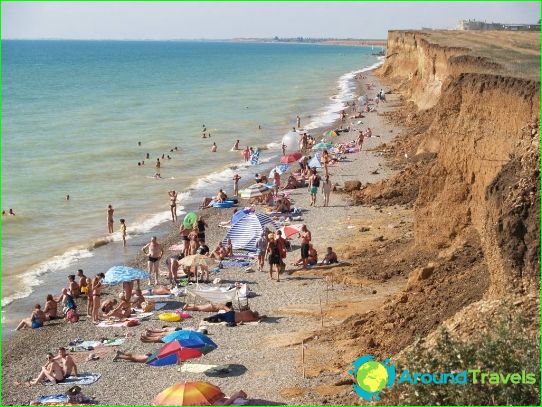 About beauty and originality of the Crimean beachesheard by many. The fresh air of the Crimea, stunning mountain views, pristine pebble and measured the noise of the Black Sea surf attracts thousands of tourists this part of the world. The best beaches in the Crimea gives visitors the opportunity to have a good rest, enjoy the beautiful landscape and get some Crimean air filled with the scent of pine.

And these beautiful, enchanting places are extremelylot on the south coast. This is the longest beach in the Crimea in Orlovka, and not crowded Cossack Bay at Cape Chersonese, and clean pebble beach Massandra in Yalta, and Fox Bay Koktebel is a real haven of tent camps on the banks of the tender sea and many other incredibly beautiful places.

Despite the fact that most tourists comeBalaklava, to look at the monuments of military history, not to sunbathe on the soft Crimean sun, the two local beaches are very popular. Both beaches - Gold and Silver - are located in the vicinity of Cape Aya, and you can get to them, or on a small boat, or skiff directly from Balaklava. Here you can admire the bay and from the height of the Castle Mountain. Silver Beach is just 15 minutes away. It is suitable for those who prefer a sandy seabed, while the beach itself with sand and pebbles. Not far from it is a golden beach. It measures more than Silver, but this beach is that is considered wild. Most likely, this is why the seabed is strewn with large boulders, and go into the water to be careful.

One of the paradises of the CrimeanPeninsula is the New World, including the Blue, Green and Blue Bay. Blue Bay - a place where young people rests primarily why this beach is the most visited. The Blue Bay water is dark, and the bottom is rocky with algae, so it is considered the most dangerous of the three, and bathe in it can only be a dead calm. The most comfortable and suitable for a family beach vacation - it's Green Bay.

The best beaches include Ukraine and Golden BeachFeodosiya and the Gold and Silver beach Balaklava. This sand and pebble beaches with a variety of sports and recreational activities from water parks to riding on a banana and a scooter, a mass of cafés, bars, restaurants and other entertainment.

Resort Olenevka - also one of the most popularplaces of the Black Sea in Ukraine, a place with the purest environment in the Crimea. It is famous for the fact that perfectly suited not only for family vacations but also popular with surfers, kite surfing and diving.

Miracle Beach Vasilyeva Beam - a true paradise,tucked away from civilization for the rocks and mountains. Perfect for privacy and relaxation from the bustle of the city. Beautiful view of the beach with views of the rock Motyl, trying on different guises in different lighting conditions, like in the theater of shadows, where you can enjoy making fun dolphins.

One of the most beautiful beaches in Ukraine is considered to Jasper Beach nepoda Leku from Sevastopol, with delicate golden brown shingle, which is the famous 80-step staircase.

Beach in the village of Orlovka

Lovers of relax in a comfortable environmentcertainly will appeal Orlovsky beach, which is considered one of the longest on the peninsula. Entrance to the beach is free, but visitors can for a fee to rent a beach chair. Beach sand and pebbles and has a high level of comfort, and this has earned its popularity. Every year the beach in Orlovka is getting better: recently there were numerous cafes, bars, massage parlors. Those who love to retire away from the people, will be able to locate and pristine wilderness areas.