Home>Articles on Cuba>Taxi Cuba - price, order. How much is a taxi in Cuba

Taxi Cuba - price, order. How much is a taxi in Cuba

Articles on Cuba
by Xavier 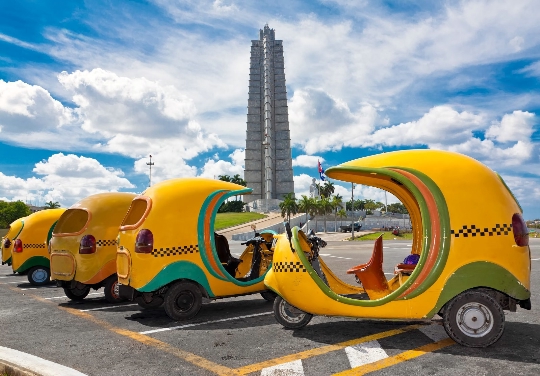 While relaxing on the Island of Freedom is positioned asluxurious, yet very, very far from the true luxury. Settle only the hotel and part of the coast. The transport structure is not developed, visible consequences of socialism in the form of old buses, which use scary. Therefore, a taxi in Cuba - one of the best ways to quickly and without straining to get to the right place.

There is also the possibility of renting a car, butthis should be with him the documents, including the law (international standard) and a credit card. It should be taken into account that the road broken, in remote regions except in a jeep and you will pass.

"All the best - for the guests!"- Such a motto reigns in Cuba. Therefore, if necessary, move around the island, many foreign travelers are tourist taxi. It has several advantages over other modes of transport:

There are also negative in this method of transportation -payment is made only in US dollars, all other currencies are not accepted. While in a normal taxi gladly accept Cuban pesos (although of dollars will not give up). Besides the official carriers in the resort area, especially in the area of ​​Varadero, and many private taxi drivers. They offer prices much lower than license the car, but insurance and guarantees they have.

On the market for the carriage of passengers in the leadThree state-owned companies, and they do not compete with each other. Each company has its own circle of passengers, that is designed for people with certain incomes.

The most luxurious fleet of vehicles owned by Cubanacan,they are willing to provide their customers with cars "Mercedes", but the price of the trip will be appropriate. A more economical option offers Turistaxi, in the park of the company is mainly Japanese subcompact, which are easily recognized by their gray color. Panataxi - offers quite reasonable prices, however, a ride with the wind can only "Ladakh" and "Lada", and only in the Cuban capital.

At a cost of foreign cars cost tourist1 euro for every kilometer of the route, the former Russian - 0.5 euros for the same kilometer. To distinguish a state from the private taxi is very simple - the first room blue from private owners - yellow.

Holidays in Russia with children - Photo ...