The streets of Tbilisi - photo, name. List of well-known streets in Tbilisi

Articles about Tbilisi
by Dominic 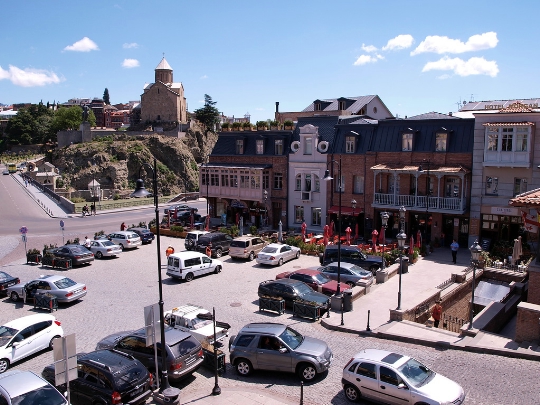 The ancient city of Georgia is considered to Tbilisi. He takes bank of the Kura and famous historical and natural attractions. As a city, Tbilisi was established in the 4th century. He has repeatedly been subjected to fire and rebuilt. The most interesting streets of Tbilisi are located in the old town.

This is the main town square, in spite of itsmodest size. She regularly occurring political battles and demonstrations. This lead many ancient streets and Rustaveli Avenue. In the center is a column with St. George - a project created by Zurab Tsereteli. This is a unique landmark that is visible from afar. From Freedom Square you can start a walking tour along the central part of Tbilisi.

It is the main street of the city. Walking down the long avenue may take more than one hour. Rustaveli Avenue is located between the two areas and connects the old part of Tbilisi with the new. The main artery of the city is decorated with beautiful buildings. Along the street there are souvenir shops, boutiques and shops. Rustaveli Avenue is located in Mtatsminda district. In this part of town is full of interesting cultural objects. With the prospect can be rolled into the street that leads to the mountain and to the Pantheon Georgian cultural figures. Streets in Tbilisi do not differ significantly in length. For example, from the metro Rustaveli Freedom Square only 1300 m. The town takes no more than 30 km.

This is the oldest part of Tbilisi. Previously, she was surrounded by a fortified wall. Lots walls partially preserved on Pushkin Street and Avenue Baratashvili. In the old city remained only a few streets because of frequent earthquakes and unstable ground.

Oldest parts of the city is Avlabar. It occupies the territory of the left bank of Tbilisi. There is a version that the city began to take shape at this point. Buildings Havlabar chaotic. There are no long streets. Short streets randomly into each other.

For the central areas of the city refers Sololaki. This aristocratic part of Tbilisi, spread between Sololakskim Ridge and Mount Mtatsminda. Famous landmarks are missing, but the area is interesting for its domestic entourage. Its streets are preserved merchants house and beautiful gardens. The main reference Sololaki stands City Hall.