Articles about Tbilisi
by aroundtravels 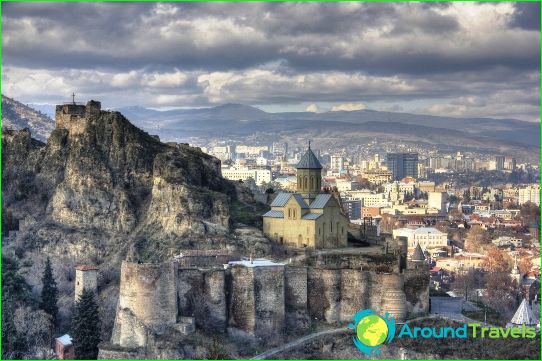 Anyone who has ever heard in my life livingperformance of Georgian men's choir already in love with Georgia once and for all. Its capital - a welcome destination for travelers who will not catch "ollinklyuzivom" and seals the existence of the golden beach, even the coolest resort. So Give tours in Tbilisi - the city where the heart is always aches from a strange mixture of tenderness and excitement, and the legs are always dancing a bit, either a glass of the best "Kindzmarauli", or in anticipation of a pleasant meeting with people whose souls are open and childishly straightforward .

Familiar Russian traveler namedTbilisi, Tbilisi has been known since the IV century. According to ancient legend, it originated because of the discovery of therapeutic sulfur springs, which even today - a good reason to look into the famous baths of Tbilisi.
The town is located in the valley of the Kura River and on the slopes of the adjacent mountains. The most interesting for the participants of tours in Tbilisi is an old center and neighborhoods, which has houses built in the XIX century.