Home>Articles about Iceland>Renting a car in Iceland. Car Rental in Iceland - prices

Renting a car in Iceland. Car Rental in Iceland - prices

Renting a car in Iceland 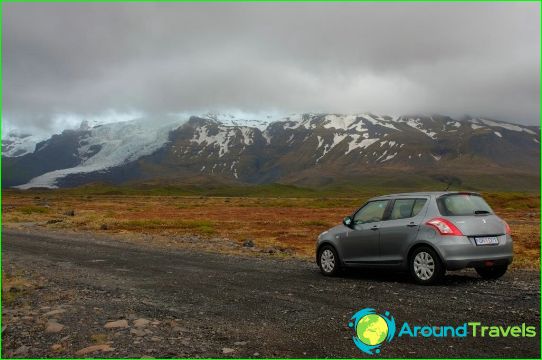 , Will have to take a car in Icelandwell fork. Therefore, if we take and then immediately SUV: the price, unlike a passenger car will be released a little more and be more comfortable to ride in many areas.

Movement in the country right hand, besides the Russian rights are valid.

Rental company in Iceland practiceinternational practice rules of passing cars to rent. It blocked all or part of the cost of rent on the credit card, driver's licenses are accepted only if they are of international standard. There are also requirements for the driving experience - at least 1 year.

High-speed mode in Iceland is the same as in most European countries:

The seat belt must always be fastened and lights - are included.

Information about the state of roads in the country, as well as many other useful materials can be found on the website of the Road service of the country.

25 years - the minimum age for driving and rent. Sometimes the age limit may be raised to 30 years, for example, for the auto classes Special, Premium, Luxury.

Driving experience - not less than one year, and in some cases - from three years (class cars Luxury, Premium).

Car required to pass with a full tank (althoughYou can use the service FPO), otherwise, you will need to pay a service for refueling plus missing fuel (fuel + service). This service is located within 30-120 euros.

Therefore, get acquainted, make a route and go to watch the volcanoes, waterfalls and fjords.

Fjords arisen as a consequence of constanttectonic activity. Fjords are very narrow and intricately winding bays, which are surrounded by almost the steep rocky shores. Icy country - this is one of the rare places on earth where there is such education.

The largest fjord in the eastern andwestern parts of Iceland. Of these, the Western Fjords is the oldest region in the country. Here is the legendary lighthouse Byargtangar denoting the westernmost part of Europe. Known Fjord and whales. Some time ago it has the largest whaling company.

The territory of the western fjord mostly uninhabited, because here is so good wildlife, especially rare species of birds. He lives here and deadlock, which has become a symbol of Iceland.

Iceland is famous for its beautiful waterfalls and more. Where glaciers are melting in summer and mountain streams filled with water. In the country there are several dozen known waterfalls, but there is also a huge number of nameless.

The volcanoes of Iceland

It is hard to imagine without the majestic volcanoes Iceland. Total in the country of more than 25. And the very same Iceland has arisen due to the eruption of molten basalt.

Hekla Volcano is the most active volcanoIceland. On the territory of one of the country's national parks - Vatnajökull - is a volcano Askja. When it erupted in 1875, there were formed two large lakes - Viti and Öskjuvatn. Only a few craters.

There are other no less famous volcanoes, which also is to drive (at a safe distance) and see.

Bangladesh Flag photo, history, the value of the state flowers ...