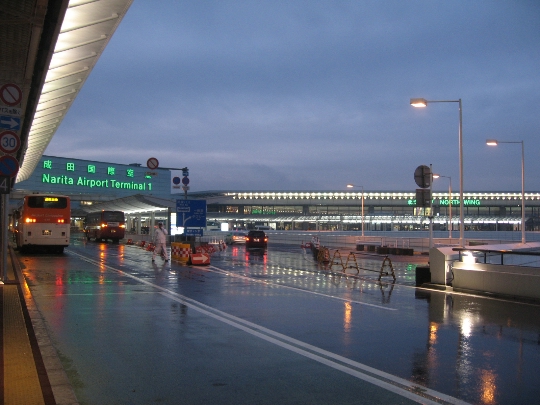 In Japan, Russiantravelers can get a direct flight. The airline "Aeroflot" makes daily flights to Japan, the largest airport in Tokyo, Japan Air Lines flies from Moscow several times a week. Travel time is about 9 hours.

The international airports of Japan

Flights from abroad take several airports of the rising sun:

Japan Narita Airport is located 60 km from theof the capital and is the largest in the country. It is based airline Japan Air Lines and land every day dozens of side air carriers from around the world.
The Terminal 1 serves internationalflights, including, and aircraft "Aeroflot" in Terminal 2 - most of the domestic traffic, and at Terminal 3 based low cost airlines. From Russia to Tokyo and you can fly from Vladivostok by "Aurora".
Transfer to the city is available on buses and trains:

Taxis in Japan is quite expensive, but you can order it in the arrivals area.

Passengers of the capital of Japan in the airport waitingflights can take advantage of all the infrastructure facilities. The terminals are open shopping centers and restaurants, banks and exchange offices, prayer rooms and souvenir shops.
Among the major airlines whose flightspresent in the schedule - carriers with a worldwide reputation. This fly Air France, Aeromexico, Air Canada, Air India, Air New Zealand, Alitalia, China Airlines, Delta Air Lines and Finnair.
Japan Airlines take passengers to New York and Madrid, Sydney and Manila, Vancouver and Frankfurt and many other cities in the world.
Tokyo Airport is a place of connections for a large number of air routes, and therefore in the terminals are open hotels, where you can comfortably wait for a long voyage during transplant.

Things to do in Yekaterinburg? What to do and ...

Christmas at the Vatican - photos, reviews