Japan Capital: card photo. What is the capital of Japan? 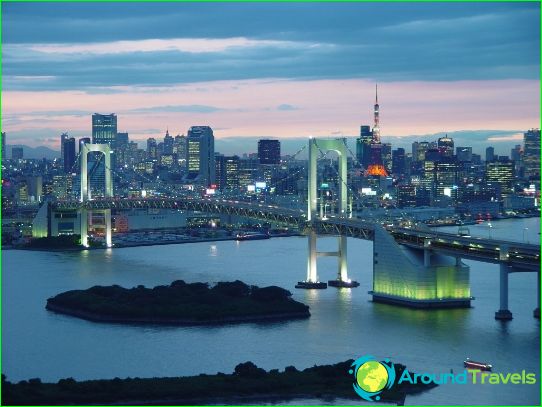 Tokyo - once a small fishing village,today a huge metropolis with a population of many millions. A huge number of skyscrapers, endless flow of people, flickering neon billboards with advertising - all of which can be a maddening. It creates the impression of human capital in Japan for the first time it visited. But do not jump to conclusions. Among this "nightmare" you are bound to find quiet corners where you can admire the traditional Japanese pagoda and flowering gardens.

Tokyo building, which appeared here in 2012year. She has already received the title of the highest TV tower in the world. Its height is estimated 634 meters. After its predecessor barely shifted last earthquake tremors, practical Japanese decided not to risk it and erected a modern miracle. On the first floor "Sky Tree" is a huge number of boutiques. In the future, the opening of the planetarium is planned here, the theater, aquarium and viewing platform, which will be located at an altitude of 350 meters.

One of the oldest urban parks in the capital. The first landing appeared here in the 19th century. Among the many temples and pagodas there was a place for the first zoo in Tokyo. Today this zoo has reached an incredibly huge size, it is home to many species of animals. Of particular interest is the little family visitors pandas.

The Japanese call park reserve museums. During the walk you can visit the Tokyo National Museum, the exhibition which has 86 thousand items.

Alley Park is surrounded by numerous kinds of sakura and spring here, guests come from all over the country to admire the flowering of the country's national symbol.

The building, dating from the 15th century, has survived fires,bombing and several coups, so only the foundation and ditch preserved from the original palace complex. Almost all the buildings in the complex are closed to the public. But you can see the Oriental Garden.

To name the Japanese always add the word "san", showing his respect for the highest mountain in the country. It rises by almost 3800 meters, giving magnificent views of the snow-covered peak of its residents Tokyo.

July and August - the months when the mountain is open forvisits. And every morning on the top of the mountain a lot of people rush to be the first to meet the beginning of a new day. Of course, the rise will not be easy, and it takes quite a long time, but to meet the first rays of the sun most of the planet - a decent fee for the inconvenience.

"My Neighbor Totoro," "Spirited Away" -true masterpieces of anime it appeared on the Studio Ghibli. To get to the museum is very difficult. The tour can be booked at the representatives of the studio, which is not too sociable, either already in the capital "fight" with automatic check, providing communication exclusively through the characters. But entering the inside, you will realize that the efforts were not in vain. Here you can see exclusive cartoons, which nobody had never seen before. They were created exclusively for the museum's visitors.

How to fly from Yekaterinburg to Moscow? Time ...