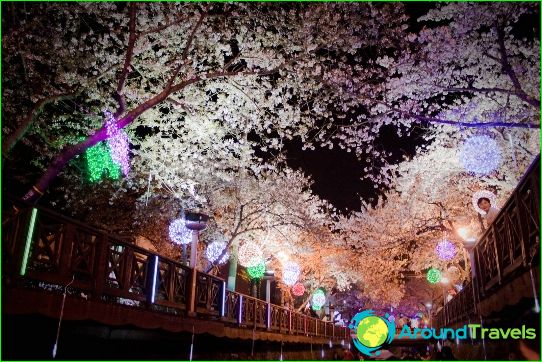 Japan Holidays - it's not only 15 officialholidays, when the Japanese have the right to rest, but also a lot of traditional festivals specific to certain cities and even villages, accompanied by dancing, singing, fireworks ...

The Japanese did not greet each other with the mostholidays. Exception - important events, such as birthday, the appearance of a child enrolled in the school. And on such occasions, the Japanese present each other with useful gifts - food, alcohol, soap, towels ...

Arriving in Japan in March and April, you canadmire the cherry blossoms - in this time of blooming white and pink and white flowers on hundreds of trees, growing in gardens, parks, alleys. As a rule, enjoy the blooming of the Japanese sent the big companies. You may want to take with them an example and have a fun picnic, spread out (you can take with them or buy victuals and drink stalls located everywhere) on the lawns of parks mats or blankets.

Life is not only transformed the Japanese duringcelebration of national and professional holidays, but also for a small annual miracles, such as cherry blossoms, chrysanthemums, camellias, peaches ...