The islands of Japan 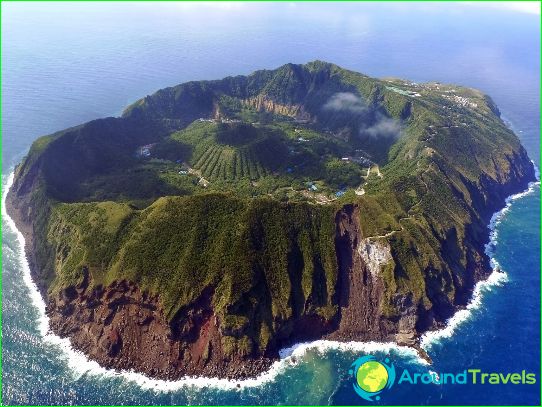 Japan - a country that is completelylocated in the Pacific Islands. Nearly all of Japan's islands are part of the Japanese archipelago. In total there are more than three thousand islands. The largest of them: Kyushu, Shikoku, Hokkaido, Honshu. The country also controls numerous small islands, which are removed from the archipelago for thousands of kilometers. Thus, Japan has significant maritime possessions.

The largest island of the archipelago - Honshu. Previously, it was called the Nippon and Hondo. It accounts for about 60% of the area of ​​the entire state. The island has a length of about 1,300 km and a width of about 50-230 km. The population of Honshu equal 100 million. Man. The largest cities of the country are located here. These include Tokyo, Hiroshima, Osaka, Yokohama and Kyoto. On Honshu is the famous Mount Fuji, which is considered a symbol of Japan.

The second largest island of the country - Hokkaido. From Honshu his Tsugaru Strait separates. Famous city of the island: Chitose, Sapporo, Wakkanai. Hokkaido harsher climate than the rest of the islands of Japan.

In third place is the size of the islandKyushu. There has arisen a Japanese civilization, as many experts believe. Today the island is home to over 12 million. Man. The northern part of Kyushu industrial enterprises occupy the southern part is reserved for cattle. This island is a single economic area of ​​the state. Its lands are many volcanoes and mountain peaks.

Another major Japanese island - Shikoku, whose population is 4 million people..

Japan Islands were settled by people gradually. The country is currently divided into 8 regions and 47 prefectures. In the past century, Japan was split into separate states. Different areas of the country are under the influence of different climates. Each prefecture has its own attractions, language dialects and cultural features. Southern islands of Japan are considered to Ryukyu, Bonin Islands and Minami-Tori-shima. Ryukyu Islands - it's 98 islands, which are located in the East China Sea. Bonin Islands are located south of Tokyo. East of other land plots located Minami-Tori-shima. There are no permanent residents people, but the island is an important strategic asset of the country.

Japan islands are climatic differences thatdue to their length from north to south. The northernmost areas are located in the cold zone. South are under the influence of the subtropical climate and central - moderate. Thus, there are 4 types of climate: moderately cold in Hokkaido, moderately warm on the island of Honshu, in the north of the subtropical Ryukyu and Kyushu, tropical - South Ryukyu archipelago. In the northern regions of Japan, cold winters. Hokkaido January temperature, on average, equal to -10 degrees. In the winter season there are frequent snowstorms and blizzards. On the southern islands are warm and dry winters. In summer, rainy and humid country.

Photographs of the Japanese Islands

Holidays in the UAE in June: prices and ...