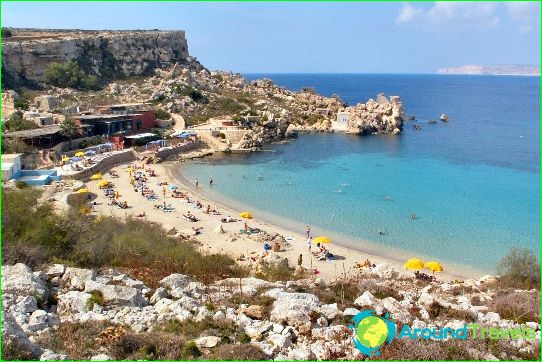 One of the most popular todaytrends in tourism is a holiday in a small European country - Malta and its three islands. For many tourists the choice of relaxing on the Mediterranean coast of Malta is caused by relatively low prices, the possibility of a quick trip (about 4 hours out of Moscow), as well as the fact that in this country you can go through a Schengen visa, since Malta is one of the Schengen states. And finally, the main thing - it's an amazing Crystal sparkling sea and wonderful Mediterranean climate, as well as the luxurious beaches of Malta.

It is necessary to clarify that the Maltese coastIt represented not wide and long beaches, and small groups in secluded lagoons and bays with coves surrounded by sheer cliffs. However, some of them are quite civilized, where you can find a cafe or beach chair, or rent a diving equipment, and there is absolutely wild and deserted place, where you can retire from the hustle and bustle. Near the Maltese islands are no tides, and, respectively, and the jellyfish, so swimming in the sea is absolutely safe.

The most popular and best sandy beaches in Malta - is:

Each of them has a sun lounger hire andumbrellas, water skiing, canoeing, sea bicycle, diving equipment, all kinds of cafes and restaurants, the possibility of flying on a parachute or paragliding and much more.

The Maltese Islands include two more largeislands - Gozo and Comino, Gozo at what is virtually separate from the state of Malta with its own traditions and its own infrastructure. This is a delightful harbor with lots of restaurants on the shore, and the most popular beach here is Ramla l-Hamra, with an unusual dark-red sand.

Be sure to visit anotherMaltese delightful place - the famous Blue Lagoon, a unique sea turquoise. Or be in the bay Dueyra where on small pleasure boats bring you the local boatmen.

Malta - a place to spend the samefamily holiday and soak up the Mediterranean sun, as well as diving and go down to the seabed for wreckage of sunken ships and local treasures, or to assess the privacy and remoteness from civilization and fuss-degenerate.