Home>Articles about Malta>Malta Flag photo, history, the value of the state flag colors of Malta

Malta Flag photo, history, the value of the state flag colors of Malta 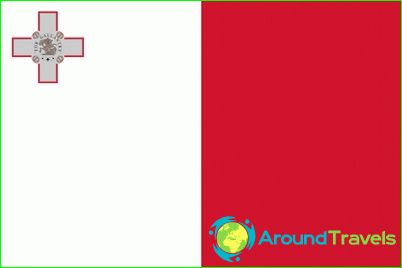 As an official of the Republic of Malta symbol of its national flag was adopted in September 1964.

Description and proportions of the flag of Malta

Maltese flag has a classic shapea rectangle whose sides are related to each other as 3: 2. The panel is divided vertically into two parts equal in width. The left side of the flag adjacent to the shaft, is white in color and free-style half - bright red.
The upper corner near the staff includes a reproduction of the markBritish St. George's Cross. The sign applied silver paint and has a scarlet narrow rim. George Cross awarded UK government Republic of Malta for bravery of its people, manifested during the Second World War. This award relates to all civilians in the island.
Malta flag motif is present on its coat of arms,which looks like a heraldic shield. It has the colors of the flag and is divided vertically into two equal parts. In the left half of the shield in the outer upper corner of the British George Cross applied. Motives of Malta flag can be seen in the tape with the motto beneath the shield. It is white in color and red hit, and its motif echoes the common motif of the Maltese flag.
Coat of arms of Malta and is depicted on the flag of the presidentcountries. The field holds his flag deep blue in the center of the emblem is the image of the country, and in the corners of cloth coated with gold Maltese cross.
Gyuis Naval Forces of the Republic of Malta hasa square shape. Its rim - bright red, the middle part is white. In the corners of a bright red border - white Maltese crosses, and on a white field exactly in the center is a depiction of the British Cross of St. George.

The history of the flag of Malta

Before the approval of the current Maltese flag, symbolState since 1943, was a dark blue flag, which is characteristic for all UK overseas colonies. In the upper left corner it was applied to the image of the British flag, and on the right side of the blue field to place images heraldic shield of red and white with the British George Cross in the upper left side on a blue field. This state flag was used until 1964, until the receipt of Malta's independence from Britain.
Prior to this, the Maltese flag, since 1875, has always been a blue cloth, top field adjacent to the shaft that held the flag of the British Empire.

Rent a car in Croatia. Car Rental in ...