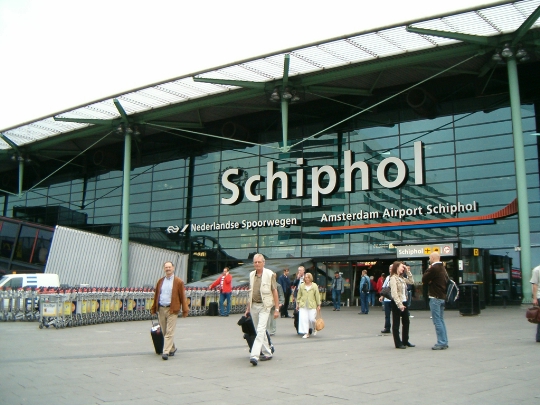 Amsterdam - a popular destination for Russiantravelers have a passport coveted "Schengen". Typically, a path to the country is through one of the airports in the Netherlands, moreover, that the choice of international air gateway here is extensive.
Direct flights from Moscow to perform "Aeroflot" and KLM and 3.5 hours in the sky with an excellent service does not have time to get bored even the most impatient traveler.

Overseas flights from Amsterdam Schiphol and takes several air harbors in different parts of the country:

Schiphol in Amsterdam - one of the most popular and largest airports in the Old World. It serves as a hub for airlines KLM and helps to maintain the European direction of the American Delta Air Lines.
The only huge terminal is divided into threedeparture hall, passengers serving several dozen carriers. Transatlantic flights operate Delta Air Lines, United Airlines, US Airways and Air Canada. East fly China Airlines, Malaysia Airlines,
and Singapore Airlines. Turkish Airlines passengers are taken to the airport from the Netherlands Istanbul, Korean - Seoul and South America Amstardam connect Surinamese.
Europe is represented by an absolute majority of air carriers and KLM has regular schedule many flights to major European cities.
For passenger service - huge storesduty-free shopping and restaurants catering for all tastes. You can be married, go to the Museum of Fine Arts, to entertain children in the gaming complex, paper and send e-mail, currency exchange and capture the plane takes off with a special viewing platform in the Dutch capital's airport.
Transfer to Amsterdam is possible by taxi. Direct buses from here in the capital and in other cities of the country, and still trains in Utrecht, The Hague and Rotterdam. Details here - www.schiphol.com.

Airport Frankfurt am Main: diagram photo. How to get ...

What is the sea in Norway? Sea to Norway ...