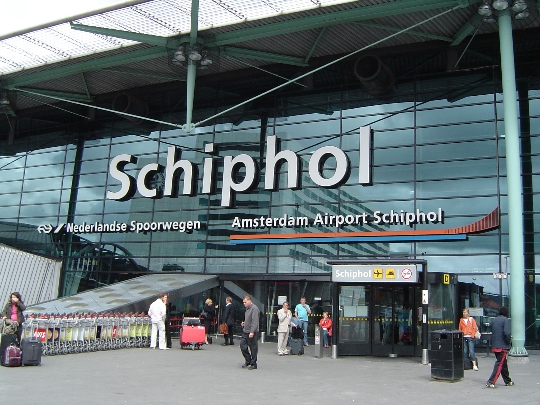 Most of the tourists arrive in the UKNetherlands by air. There are more than a dozen airports, but especially popular with travelers enjoying three - Schiphol in Amsterdam, Rotterdam, The Hague and Eindhoven seven kilometers from the city of the same name. These airports Holland take on a daily basis, tens of thousands of passengers who want to know the country of tulips.

The main Dutch airport dates back to 1916. It is located south-west of Amsterdam, and has repeatedly recognized as one of the best in Europe:

At Schiphol airport there is a single terminal,area is divided into three halls of the transition system. All infrastructure, including shops, restaurants, lounges and even a branch of the Rijksmuseum are located under one roof.
From Amsterdam Schiphol separates a little over 17kilometers. This can be overcome on trains, departing from a platform under the main hall. Tickets are purchased at the automatic teller yellow-blue. The journey takes less than 20 minutes, and trains arrive at the main railway station in the center of Amsterdam. Rail service runs around the clock at different rates depending on the time of day. A taxi ride will cost ten times more expensive, but to win in time, on the contrary, will not succeed.

Air gates of the Netherlands - this airportthe city of Eindhoven. There is a hub of many low cost airlines, which prefer to fly solo travelers. Eindhoven Airport Netherlands can not boast an abundance of shops and restaurants and has a world record, but all you need for a comfortable waiting for your flight here finds each passenger.
The international status of the airport and Rotterdam-The Hague, but the main route taken by them - domestic and Schengen zone.