Amsterdam 3 days: where to go in Amsterdam 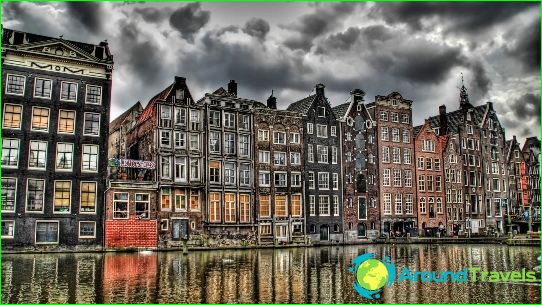 Going to the capital of the Netherlands,the average tourist is about, what this city is famous for. In Amsterdam for 3 days everyone wants to ride on the canals by boat, buy wooden clogs, take a look at the inhabitants of the Red Light District and buy a few bulbs of tulips, to try to grow beautiful flowers at home. What more could and should have time in Amsterdam for 3 days?

The world capital of museums

Such informal name the capital of the Netherlands deserves, because its streets are open exposure of different meaning and content:

Tour of the royal

Once in Amsterdam for 3 days, it is not necessarylimited to branded eating herring and disappear in the coffee shops, the expense of losing precious time. A great way to immerse yourself in the history of the capital of the Netherlands - a walk to the former town hall on Dam Square. Today it is the residence of the King, built in the middle of the XVII century. Built in the style of Dutch classicism, the building of yellow sandstone topped by an elegant dome. At the very top of its installed wind vane in the form of a boat, which all kind of stresses that Holland for centuries has been a maritime nation.
The interiors give an idea of ​​what a truly royal luxury, and Rembrandt, Flinck and other great Dutch emphasize the solemnity of the moment.