Netherlands Capital: card photo. What is the capital of the Netherlands?

Amsterdam - the capital of the Netherlands 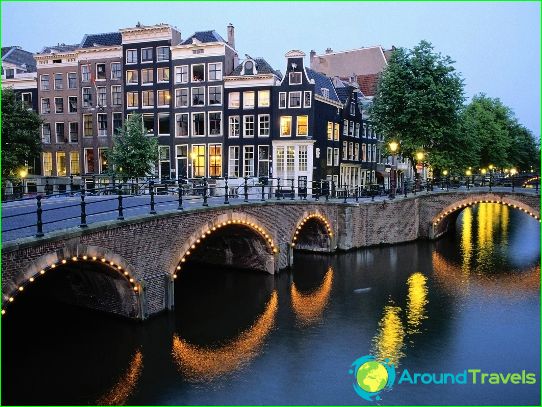 The capital of the Netherlands, Amsterdam, is athe largest port in the world and the largest city in the country. Attractions in Amsterdam that worth exploring, just do not count. But if you come for a couple - three days, then make a choice will be damn difficult.

Translated from the Dutch Dam means "dam". In 1270 a dam was built here, connecting two settlements. Later it was strengthened and greatly expanded, turning into a real area. It was formed around her and the city itself. The area soon became a place of concentration of dealers. One side held the fish market and the town hall was built on the opposite side. In the early 19th century it became the residence of the king.

Central Station and the Rijksmuseum

Deciding on a walk around the city to exploreExposure Rijksmuseum - the main museum of the capital - do not confuse it with the building of the central station. Make it very simple, because they are almost identical in appearance do not differ from each other. But they are located in different areas of the city. Outwardly, the two buildings that were built in a magnificent neo-Renaissance style. Designing twins engaged famous Dutch architects: Adolf Leonard baths Gendt and Peter Kuipers.

Here you will be able to appreciate the skill of the unrecognizedwhen the genius of life - surprising the Dutch painter Vincent Willem van Gogh. Amsterdam museum exposition includes more 200 paintings. There hang the world-famous "Sunflowers". In addition, visitors can see paintings and many pencil drawings of the artist. Among them are his first children's drawings.

Coming here, you seem to get in the past. Amazingly beautiful house with facades XVII-XVIII centuries are located on the medieval street level. The architectural complex is situated below the ancient buildings of the capital on a meter. The owners of the Beguinage is currently the English Reformed Church, but it was originally a monastery Beguines.

Beguines religious movement in Europe of the XII century it was very common. Women of the Order led a monastic life, but did not give the eternal vows and were free at any time to leave the monastery.

Construction had the first Beguinagehalf of the XIV century. Surrounded on all sides by channels, he had only one entrance / exit, bore the name "Alley Beguines." During the walk, note the house at number 34 - it is the oldest building in the city.

Here you will see and Rembrandt, and Pavarotti, andSpider-Man - hundreds of pieces that replicate the originals. Museum organizers have provided all visitors to comfortably capture your visit to this amazing place. Next to each of the sculptures there is a special place where you can stand, sit or lie down. Photos obtained with surprisingly realistic.

You can even visit a tiny shop and look at the process of molding pieces, if desired.

The greatest interest for fans to tickle nerves is part of the museum named «The Amsterdam Dungeon». It accurately reproduces the medieval dungeon.

Currency in the Maldives: the exchange, importation, money. What ...

Children's camps in Moscow in the summer. Children's ...