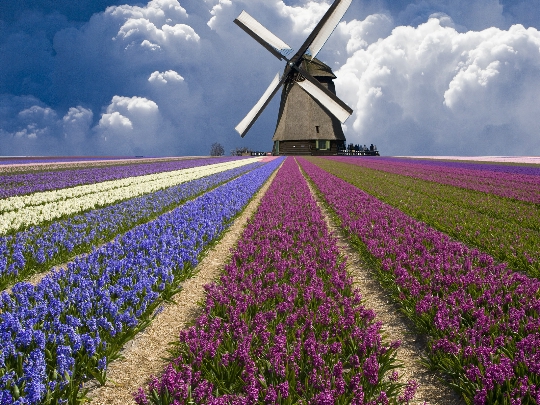 The province of North Holland - one of thehistorical areas of the Netherlands, gave an informal name throughout the country. It is located in the west of the state, it is the second largest in area and its capital is the city of Haarlem. North Holland is considered his home nearly three million people, which allows it to be the second in the country in terms of population.

The peninsula, which stretches North Holland,many of its shape resembles a human head. It is issued in the North Sea and half is remediated land resulting from persistent struggle with the sea. Such lands in Holland a lot. In addition to the major cities of Haarlem province are Zaandam, Hoor and Helder. Amsterdam is also located on the ground of North Holland.
Throughout the history of the existence ofProvince it is combined with South Holland, the newly segregated, divided into departments and reorganized. The current administrative division of North Holland includes 58 communities. Three of the Netherlands Antilles in the overseas territories are also invited to join the province.

A little about Haarlem

North Holland Haarlem Capital - the city is nottoo high by international standards. In Harlem, New York, called once by the Dutch settlers in his honor, which is home to more people than in the Netherlands. Every day, about 155 thousand people slowly, as is customary in the Dutch go about his affairs Haarlem, near attractions and historic buildings, thanks to which the city is always a lot of tourists.
Harlem appeared on the map of the Netherlands in the tenth century, andits good geographical position has provided a small settlement rapid growth and economic development. Earl Dynasty set up fortifications and made Harlem in the XII century as his residence, and then urban knights took part in the Crusades and the conquest, for which he received the right to represent the city's coat of arms on the knightly sword and shield.
Harlem repeatedly destroyed by fires and plagues, he participated in the Hook and Cod wars, it was precipitated and robbed the Spaniards.
Golden Age has caused a surge of cultural development of Haarlem and the names of the painters who worked at that time in the city, suggest the city one of the major artistic centers of the kingdom.

The main architectural attractionsNorth Holland dated XII-XIX centuries. Town Hall on the main square of Haarlem and Vleeshal, the Church of St. Anne and St. baone, Railway station and Adrian Mill -.. For the curious traveler Province will open a lot of interesting pages and give a lot of aesthetic pleasure.