Home>Articles on Netherlands>Park flowers in the Netherlands - a photo, a description of

Park flowers in the Netherlands - a photo, a description of

Park flowers in the Netherlands 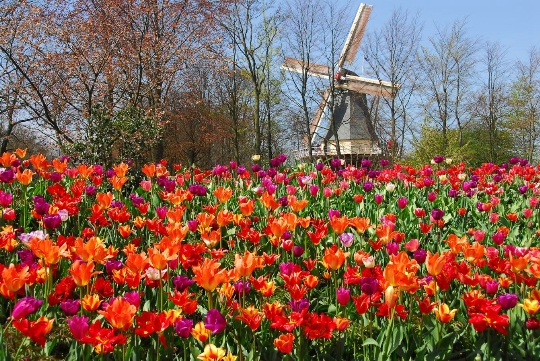 Kёkenhorf Park - one of the favorite all touristsattractions of the Netherlands. His bright and colorful lawn spread in the small town of Lisse. The name translates from Dutch as "kitchen garden", as in the Old World, he is known as the "Garden of Europe". The area occupied by the park flowers in the Netherlands, is only 32 hectares, but the joy and pleasure of his visit is not measured in square meters.

Half a century of beauty

The first spring flower exhibition was held here1949. For more than half a century has repeatedly changed and floral fashion trends, but the tradition every year to please the 800,000 visitors to the park remains unchanged and impressive.
Seven million colors are the pride of thosewho cares about the prestige of the park and prepare it for the spring arrival. Tulips and hyacinths, daffodils and orchids, roses and lilies - Kёkenhorf becomes the center of attraction even for those who have never considered myself a fan of botanical or flower arranging.
There delighted paralyzed children and adults,men and women, Europeans and Asians. Riot of colors and infinite variety of shapes make the park one of the most famous and memorable sights of the Netherlands.

The territory of the park flowers in the Netherlands isthe venue for a wide variety of activities. Theme exhibitions annually changing themes and for landscape designers and became the anniversary of Van Gogh, and the fall of the Berlin Wall.
Three Kёkenhorf park pavilion exhibit abouttwo dozen exhibits, each of which deserves a separate story. Flower shows are becoming a background for children's Easter holidays and beautiful art exhibitions. Beauty tulips accompanied by brass bands concerts, dance performances and singing choirs.
On April 27, the country and the flower park in the Netherlandsare identical celebrating the Day of the King, and the third Saturday of April Kёkenhorf becomes an arena for the feast of tulips like a Caribbean carnival fills the streets of cities from one end to another.

Cruises along the Oka River. Cruises on the boat on ...