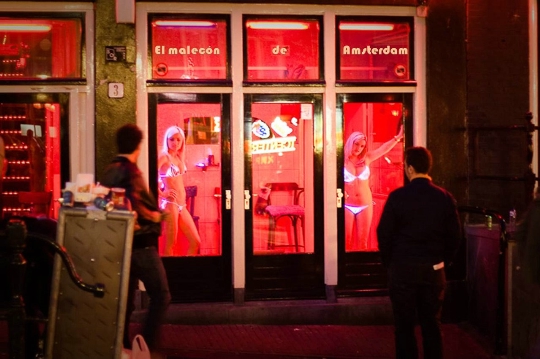 Perhaps the most famous Amsterdamlandmark, the Red Light District invariably becomes a place of attraction throughout the tourism fraternity, and sometimes - on the first night. Forbidden fruit is known to be the sweetest and travelers wish to witness part of the city, where reigns the prostitutes. Red lanterns in the Netherlands appeared in the Middle Ages and became a symbol of corrupt feelings for many centuries.

"Hey, sailor, you sailed too long!"

The area known as the Red Light District,Located in the heart of the old city. In the XIV century it opened a lot of pubs, which, thanks to its proximity to the port, often frequented by sailors descended on the shore. Long swimming saps the strength and gentlemen Marine luck required discharge and inspiration. The girls of easy virtue have chosen this quarter, and for Amsterdam entrenched not too pleasant thank the city of vice.
The authorities tried to restore order, limitingmovement of prostitutes framework of a city block, and obliging them to carry the red lights. The Netherlands is slowly but surely on the path of legalizing prostitution, which is what happened in 2000. Today Red lights - and a popular tourist attraction, and the business district, where work on the representative of the ancient world union.

At the site of today's quarter locationRed lanterns in the Netherlands were once medieval fortifications. That is why together locals call this street "stenochku" - De Valletes. A stroll here is equally interesting to both day and night. In the light of the sun of the showcases in which girls offer goods, they say, the person is usually empty, but there is a chance to see the colorful old Amsterdam architecture. Left in the day shift representative of the oldest profession in waiting for customers engaged in quite mundane chores, but because you can even try to make a couple of shots unnoticed.

Take advantage of the services of prostitutes in the red light is very easy in the Netherlands. Suffice it to take an interest, and cherished the door slightly open.

UAE Flag photo, history, the value of the state flowers ...