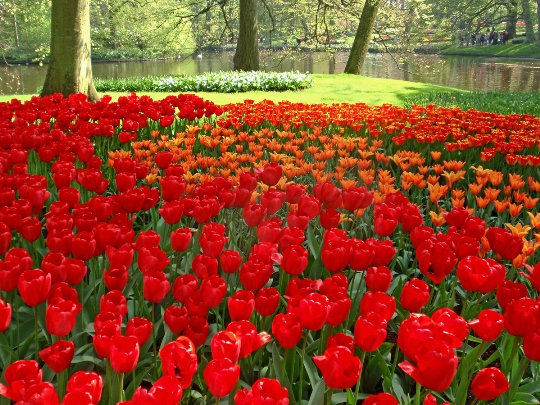 The Netherlands is often called the MeccaEuropean tourism. On the small square fit many architectural attractions, amusement parks, historical sites and areas of active recreation. In response to the question, what to see in the Netherlands, the country people themselves will certainly be called interesting places of his native city, and they will be right: in the kingdom on the shores of the North Sea, you can spend a vacation and not miss a single minute.

Through the pages of guidebooks

It is generally accepted that view in the NetherlandsAmsterdam - it means to know the country and understand its culture and customs. But the capital - the only part of the extensive program, which can offer the hospitable residents of the Netherlands. Amsterdam Attractions knows without exception, anyone who is interested in travel. Hundreds of bridges and canals, the Red Light District, jewelry factories and breweries, which serves the famous beer Holland, Madame Tussauds and floating amphibious bus - Amsterdam may be different, but it is always courteous to those who wish to get to know him. To optimize costs during trips to museums is most advantageous to purchase a Museum Kaart. Map will not only save on the entrance fee, but also help to avoid long queues at the ticket counter.

For the little ones

The oldest zoo in the NetherlandsRotterdam - a rich collection of birds, fish and mammals, and many of them - exotic. Representations of the outdoors and the opportunity to closely interact with the animals will help parents decide what to see in the Netherlands, if you are planning a vacation with children.
By the way, there is for young travelersgreat winter Holland. At this time, the Efteling park turns into a fairy-tale town, where children are waiting for trim trees, thrilling rides, skating with ice slides and the sea of ​​hot chocolate for dessert.

That's what the country on the day of the king, whoTraditionally celebrated on 30 April. It will be difficult to choose what to see in the Netherlands on this day, but the most important festive event takes place on the streets and squares. Dressed in orange T-shirts subjects greet their monarch, and the cities and villages of the country are similar to large oranges. In Utrecht, this day was called the famous "flea" market, where you can find the most interesting and unusual souvenirs from Holland. By the way, the traditional gifts to friends and family can become famous tulip bulbs.

The capital of Cape Verde: map, photo. What is the capital city in ...

How to fly from Karlovy Vary to Moscow? ...