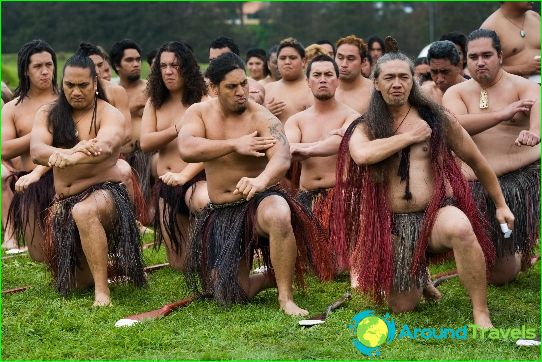 For most travelers the way to NewZealand seems too long and expensive, but because it is a tourist destination in not even considered as a holiday destination. However, the New Zealand culture, its magnificent natural parks and reserves - excellent reasons for buying tickets to these distant from the center of the world civilization of the island.

Maori and their legacy

In the formation of the New Zealand culture hugethe role played by the heritage and traditions of the Maori. The indigenous population of the islands for centuries not been written, but because of this fact was the extraordinary development of the art of carving on wood or bone. With these crafts Maori descendants transferred the information and maintaining their skills and traditions. Reading the carved images, and today - an integral part of New Zealand culture and its indigenous peoples.
Ancient Maori cultural tradition - drawingTattoo, which was a symbol of a certain social status and social status. Equally important ritual dances and played hack. A modern interpretation of dance movements taken as symbols of the armed forces and naval units in New Zealand.

Museums on the edge of the world

The history and development of New Zealand's culture reflected in the expositions of the main museums in the country:

An important contribution to the formation and development of cultureNew Zealand made its famous natives. The whole world knows about the achievements of the "father of nuclear physics" Ernest Rutherford and about the record of Edmund Hillary, first to conquer Everest. Islanders are proud of Bruce McLaren, the legendary pilot of Formula 1 and the film director of the trilogy "Lord of the Rings" Peter Jackson filmed in the vast national parks of New Zealand. Actor Russell Crowe won an Oscar for the role of a gladiator, a scholar Brian Boyd was famous for having written the most detailed biography of Vladimir Nabokov.

Holidays in Austria in August: prices and ...