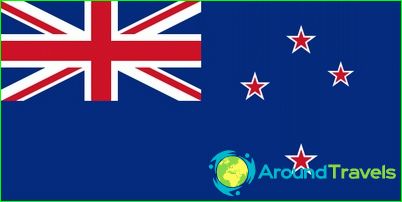 The current New Zealand flag was adopted on March 24In 1902, it is a rectangular cloth predominantly blue with a proportion of one to two sides. In the upper left corner it shows the British flag "Union Jack" (otherwise known as "union jack"), which represents the historical identity of New Zealand to the British Empire. The country is a former colony and a member of the British Commonwealth today. On the right side of the flag depicts four classic stars, which are the symbol of the geographical location of the state. They also represent the four brightest stars of the Southern Cross constellation. They are red and thin white okaemku.

From 1834 to 1840. It used the flag of the United Tribes of New Zealand, which was also based on the flag of England. He had a white background, the red cross of St. George and middle-invader country's flag in the top left-hand corner, which also consisted of the cross of St. George and four red stars on a blue background. Then, until 1902, from time to time the New Zealand flag is completely replaced by the Union Jack, as Britain remained the sole ruler in this land.

In 1867 It was adopted by the first flag, based on English blue flag, which served as the basis for "a Colonial Fleet Protection Act." According to this innovation, all the colony ship carrying blue flag, owned by the Royal navy, decorated with the emblem of the colony. But since New Zealand did not have their logos or emblems on its flag is simply set the red with white border letters NZ (which meant New Zealand).

And already in 1869 It adopted the current version of the flag, which at first can be used only on government vessels. But at the expense of patriotism manifested during the Second Boer War, adopted the flag in 1902 became a national gradually. This caused irregularities in connection with the use of different options for the flag, but because those in power the Liberals introduced Bill of banner and code signals, which was approved by King Edward VII as the time March 24, 1902

As for the symbolism of the colors of the flag,their value does not differ from the British variant, which is the basis. Blue symbolizes the sea (which New Zealand can be a symbol of the ocean), red - not that other, as the St. George's cross, meaning England and white saltire of St Andrew -.. This designation Scotland. Oblique red cross of St. Patrick -. A symbol of Northern Ireland.

Equatorial Guinea Capital: card photo. What is the capital of ...

Shopping and shopping in Slovakia. What to buy, ...