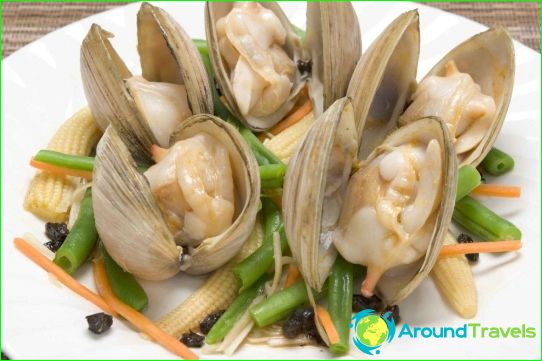 Power New Zealand characterized in thatthe cost varies depending on the area in which there are numerous places (on the South Island of the cost of food will cost you less than the North).

In New Zealand you can eat:

It is worth noting that in restaurants that do not have a license to sell alcohol, you can come with their liquor (look for the label: BYO - BringYourOwn), while paying a nominal fee.

If you - not only gourmet, but a fanexotic food, then you should go to New Zealand to the Festival "Wild Food" - here you will be offered to taste a dish of worms, resembling sushi, meat grasshopper, baked in a sweet sauce, and shark meat, fried in deep fat. In addition, you can eat fried patties of Snetkov (small fish), boneless, breaded in flour and eggs, snails in garlic sauce, fried clams and baked fish, cucumber. As for drinks, you will be offered a beer of local producers and floral wine.

In addition to gastronomic experiments, this festival offers concerts, dance performances, comedy shows and pantomimes, and in the evening - disco.

In New Zealand, you can sunbathe on the beaches,explore the natural sights, go fishing or walk on a yacht, diving, windsurfing, jumping, and also enjoy New Zealand cuisine.