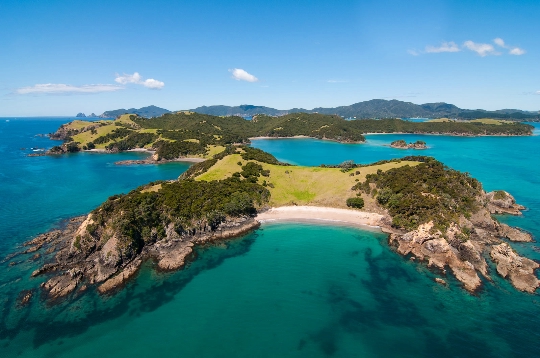 On the two large islands of Polynesia (Pacific Ocean)located in New Zealand. South and North of the island make up the territory of the state. In addition to them in the land it includes more than 700 small islands. Far North of New Zealand - a vast hilly territory to be used for agriculture. In this area, small population, so uninhabited spaces are not uncommon. For the northern part of the country is referred to areas that have spread to the north of Auckland. For tourists this place attractive as possible here a wonderful beach holiday, fishing, sailing, scuba diving. Natural attractions are the Bay of Islands and a beautiful beach that stretches for 90 miles. In this part of the country it is recommended to go for those looking for sea, sand and sun. If you are interested in more tranquil and solitary places, it is better to come to the Gulf of Kaipara. The largest of the island states in Auckland, Bounty, Stewart, Kermadec etc.
The famous place in the north of New Zealand -North Island, whose area is almost 113,730 square meters. km. The magnitude it takes the 14th place among the other islands of the planet. It has less mountainous than the South Island, which makes it more convenient for the construction of ports and cities. Most of the country's population lives in the North Island, so here are the most significant places in New Zealand. An active volcano Ruapehu is considered the highest point of the island. Its territory is characterized by high volcanic activity. In the center is the largest lake in the country - Taupo.

The climate in the north of New Zealand

In this area of ​​the country is dominated by subtropicalwarm climate with plenty of sunny days per year. Towards the south, it goes to a moderate cool. In the mountains, there are places with alpine climate. West wind does not penetrate deep into the territory through the Southern Alps. The average annual temperature in the north is 16 degrees. The winter months are considered to be the warmest. The coolest month is July. New Zealand's climate is influenced by factors such as the sea and the mountains. The coastline of the two main islands stretches 15 000 km, so the sea can be seen in any part of the country. Distance to the sea from any part of New Zealand does not exceed 130 km.

North of New Zealand famous by cityAuckland. It is seeking to come here many travelers. There are good beaches with black sand, clear sea, subtropical forests, mountains and others. Auckland is of interest to people who are not indifferent to the Polynesian culture. In the south of the North Island is the capital of New Zealand - Wellington, where the country's attractions are concentrated. In this city of changeable weather and constant winds piercing. A popular destination among tourists is considered to be the central part of the North Island.

Taxis in Jerusalem - price, order. How many ...