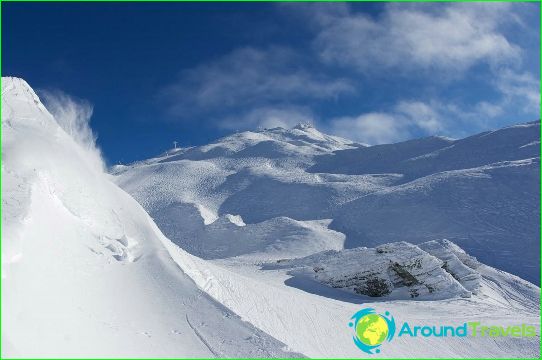 Countries in which nature reigns, calla small country in the Pacific Ocean. Beautiful mountains and pristine lakes, national parks, where the breathtaking scenery just from, and the ability to engage in all kinds of extreme tourism - from rafting to scuba diving to the wreck. It was in New Zealand in skiing and snowboarding have a chance to try to get a completely new experience of riding.
Resorts in this country is characterized by high technical controlequipment and comfort. Perfectly groomed trails, well-marked. In all areas of organized skiing equipment rental and season with confidence lasts from June to September, when winter begins in New Zealand.

On the southwest slope of Mount Ruapehu spreadone of the country's largest ski resorts, which attracts skiers and dosochnikov of various levels of training. Border prefer it thanks to the vast possibilities of off-piste riding. In addition, Turoa is equipped with a nice fun park and halfpipe built for practicing tricks and somersaults.
Ski Area in the region located at the level of1600 to 2322 meters and is the country's largest vertical drop. Season to Turoa lasts until October, starting in June, and the snow cover is installed to a depth of two meters.
The total number of tracks laid in the regionis 17, of which one quarter is marked in black. The descent, which is considered the longest, here stretches for four kilometers. Newcomers also have a place to practice - at the resort is equipped with a few green runs and works good ski school. Education in the group is 25 NZD per hour, individually - 70 NZD. Ski pass for a day of skiing would cost 72 NZD, five - 320 NZD.

The best in terms of experienced snowboardersResort in New Zealand located in the South Island near the town of Wanaka. Treble Cone, enabling easy ride from June to October when the snow height of more than three meters, the quality of which support 20 guns for every 50 hectares of ski area.
Picturesque landscape views from 2100 meters -the highest point of the resort. The difference in height in local downhill is more than 650 meters. Six lifts ensure unimpeded delivery of athletes to the starting place, and almost half of the local black marked trails provide the resort's popularity among real guru snowboarding and skiing.
Rough great time in the park with a fanTrump, kickers and other complex shapes or hone their skills on two local halfpipe built with inherent locals Q and thoroughness.
Ski passes cost 90 and 300 NZD per day or five days respectively. Hotel resort fund provides the average standard double room for about $ 100 per night.

This New Zealand ski area stretcheshigh up in the valley in the mountain range in the South Island. The season here starts in mid-June and lasts until October. ski areas are located at an altitude of 1600 to 1900 meters, and is equipped with a total of 30 km of trails for the different categories of complexity. Beginners and pros an opportunity to warm up to 7 km of green and black runs respectively. Seven modern lifts have a capacity of up to 7000 people per hour.
Rough like Cardrona due to excellentequipped with a fan park with a traditional set of figures for the excercise of jumps and somersaults. In addition, the resort built as many as four half-pipe of various sizes, which makes it possible to jump the queue and bustle do what he likes. Cardrona is famous for its snow. He is particularly dry and light, and in combination with the wide open slopes is the best guarantee for the organization of off-piste skiing.
Cardrona Hotel is located right on the slopes, andSurrounding cities Queenstown and Wanaka are ready to take those athletes who did not stay at the resort. Ski pass for a day of skiing would cost 94 NZD.

This region is the very first opens traditionski season in the country. It boasts the most stable and high-quality snow FIS certified trails, which give him the right to be included in the circle of the championship World Cup ski circuit.
Starting the season at Mount Hutt in May and lastsuntil October. Slopes are located at an altitude of 1400 to 2075 meters and comprise a total area of ​​over 350 hectares of which 42 hectares are subject to snowmaking in case of problems with the weather. The resort has ten ski lifts and rental and repair of equipment.
A quarter of all slopes in the region are given for beginners andthose who is not too sure of themselves. The same routes are marked as black and allow to get your dose of adrenaline from this guru snowboarding and skiing. By the way, dosochnikov excellent feel in the local fan-park and two excellent quality halfpipe.

Photos of the ski resorts in New Zealand

Iraq Flag photo, history, the value of the state flowers ...